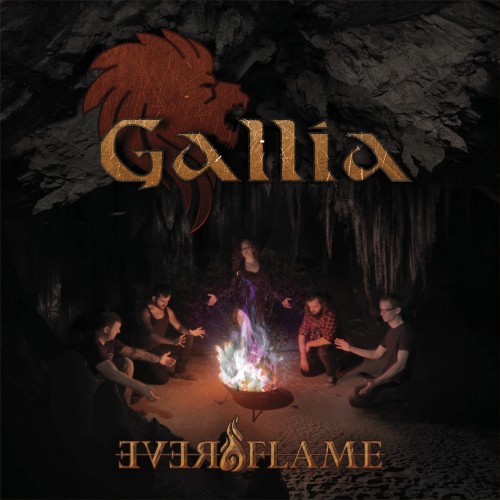 I first heard of Gallia last October when the band asked me to promote their charity gig dedicated to Rode Neuzen Dag (our country’s version of the BBC’s Red Nose Day event). Later on, Gallia contacted me again to present me their debut EP “Everflame.” Do I need to say more? No, just shred.

“Everflame” is the debut EP of the Belgian symphonic metal band Gallia. It’s an independent release sent to me by my Dutch buddies at Hard Life Promotion as well as by Gallia themselves shortly before they joined HLP. Many thanks to both of you for sending me the material.
One thing I quickly noticed when listening to this EP is the overall variety in the six songs Gallia have put out for their first release. Beginning with the guitar heavy “Rain Starlight” and then moving on to the highly rhythmic “Devil’s Cry” and the upbeat “Rise Of The Fallen.” Then comes the fast pounding “Papercuts,” the choir chants of “Fight Of Fools” and finally the grunt filled “Frozen Sun.” And if that wasn’t enough, all six tracks have their own orchestral versions featured as bonus tracks!
Although all songs have their unique traits, they all still share a consistent style that’s similar to acts like Nightwish, Epica and Within Temptation. Heavy riffs and beats combined with angelic vocals and plenty of classical music instrumentation. And I’ve got to admit that Gallia’s musical presentation and production are quite top notch. Like any competent symphonic metal band Gallia managed to drag me in with their catchy lyrics and carefully balanced mix between heavy metal and orchestra, resulting in a really cinematic set of tunes. All produced in crystal clear quality and with a genuine knowhow and love for the symphonic subgenre.

The “Everflame” cover art features the Gallia guys and gal sitting in a cave and meditating around a campfire. Pretty simple artwork, but I do like how the brightly colored golden font and red lion of Gallia are in stark contrast to the overall dark shaded cover photo. And who knows, maybe the campfire setting is a reference to Nightwish. It’s well known that Tuomas Holopainen came up with the concept and name of Nightwish while sitting at one such campfire.

“Devil’s Cry” is a definite favorite of mine. I particularly love this track’s marching rhythms featured in every element of this song. The pacing of Elyn’s vocals, the pounding drum and bass beats of Dieter and Laurens respectively and the fanfare-like guitar and symphonic arrangements from Davy and Yannick. It’s a catchy and badass tune that I’ll certainly high-step and salute to! Also big props to the orchestral versions of the EP’s songs. They’re truly epic, high-production setpieces and without the vocals and heavy metal instruments, they’ve become unique songs on their own. So basically you get 2 EPs for the price of one.
There are only a few minor issues I can tell about Gallia’s debut EP. For instance, I felt that Elyn’s vocals were a bit too far down in the mix and as a result they sometimes get lost among the guitar, drums and orchestration. And I also miss an intimate ballad which is otherwise so common among symphonic metal bands (think songs like Within Temptation’s “Our Farewell” or Nightwish’s “Walking In The Air”) That would’ve made the package even more complete.

8 ruby lions out of 10. Despite Gallia’s early age and (likely very limited) resources, they did manage to craft a powerful and varied debut that I can warmly recommend to anyone who enjoys some symphonic metal bombast or just orchestral music in general. And given the fact that you technically get two EPs in one, that’s a nice big bang for your buck! Here’s the music video for “Rise Of The Fallen."