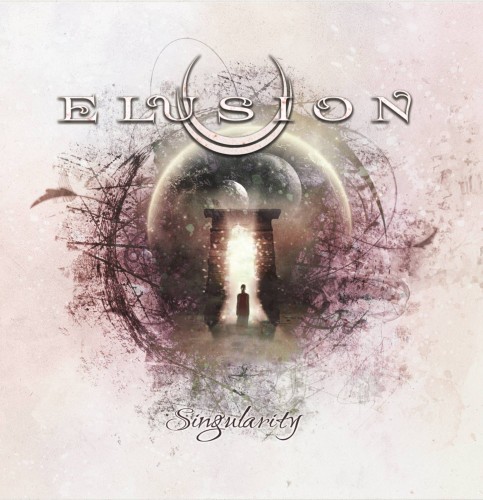 I’ve had my first taste of Elusion in January 2017 when my friends at Hardlife Promotion offered me to review the band’s debut EP “Desert Of Enticement.” A short release which I enjoyed a lot (read my review of that little gem here: http://belgianmetalshredder.be/reviews/61) and the same goes for the release party they threw at JH Asgaard that same month! Now, two and a half years later, Elusion’s back with their first full-length. I’m looking forward to shred this one!

“Singularity” is the first album from the Belgian symphonic metal band Elusion. Formed in 2015 by former Ancient Rites guitarist Domingo Smets. This album is released through Spanish record label Art Gates Records and just like last time Dutch promoter Hard Life Promotion handles the Benelux promo.
If you’ve already listened to Elusion’s earlier EP then the material on “Singularity” will instantly feel familiar. It’s sharp and heavy symphonic metal with plenty of orchestral, folk and Middle-Eastern music elements thrown in as well as some extreme metal touches like black metal (“The Strive”) and groove metal (“Reconciliation Of Opposites”). One thing I love about Elusion’s style is that, unlike many other symphonic metal acts, they don’t try to sound overly bombastic or dramatic. For the most part, this album has a confident and relaxed feel to it, as if Elusion is saying “we know what we’re doing.” As a result, every weapon in Elusion’s varied music arsenal shines on an equally high level. Some songs on “Singularity,” such as opening track “Choices and Chances” and “My War Within” are fast and heavy symphonic tunes taking cues from the likes of Epica while others like “In Eternity” are slow and intimate similar to a classic Nightwish ballad.
Vocalist Evy shows off a wide vocal range in this album. She smoothly goes from angelic narrations to growls and shrieks (sometimes switching back and forth in between vocal lines, giving the illusion that there are two singers at play). In addition, there are a couple of guest vocalists on the album, specifically Peter Evrard from 10 Rogue and Björn “Speed” Strid from Soilwork. Peter’s signature snarls give the track “Reconciliation Of Opposition” some extra spice and Björn’s naturally operatic singing makes him well up to par with Evy’s own majestic voice when he appears in the songs “Lovelorn” and “Anamennis.” Music-wise, the band added Stijn Van Peborgh as a second guitarist and so more emphasis is put on the guitars. Both him and founding member Domingo do a great job setting the stage with their expressive guitar work fueled by Kristof and Frederik’s tightly structured rhythms. All things considered, Elusion took the solid foundation they established with “Desert Of Enticement” and simply expanded on it. Nothing more, but certainly nothing less! Let’s move on!

Elusion’s “Singularity” deals with typically symphonic metal subjects such as nature and exploration, love and despair, redemption and forgiveness, the passage of time and philosophy. I must admit that Evy serves as an excellent narrator for these stories. She has a warm, engaging voice that kept me hooked throughout this 50-minute piece of thinking (wo)man’s music.
Elusion’s creative mentality of less-is-more is also apparent in their artwork. Symphonic metal tropes like a watch, an hourglass and a child standing in front of a giant gate of blinding light are all here, but it’s all presented with soft, sand-like coloring (maybe a nod to their well-received “Desert Of Enticement” release). It gives the artwork a sober look yet it still stands out thanks to its colors.

One of my big favorites on this album is the single “Lovelorn.” In this particular track Soilwork’s very own Björn Strid joins in and together they sing a magnificent ballad. While their vocal styles are similar in this duet (both of them sing clean middle to high notes), they share plenty of musical chemistry! I really hope Björn and Evy will be doing more tracks like that in the future.
If you’ve been following me for a while then you know I’m not a big fan of overly long tracks and while “Anamennis,” the album’s 8-minute finale, wraps things up greatly, the song’s instrumental ending felt unnecessarily long. Personally, I would’ve ended the song with Evy unleashing one final epic high note and then about 30 seconds of symphony rather than 3 full minutes of it. Too much of a good thing isn’t always a good thing and fortunately Elusion followed that same philosophy throughout most of “Singularity” so…

8,5 screaming trees out of 10. Elusion’s debut full-length is a more than worthy successor to their already great first EP. Elusion’s sound is both a homage to classic symphonic acts but its sheer musical variety and less-is-more presentation also breathe in some sweet fresh air to this well-established subgenre. I don’t believe that Elusion’s momentum won’t be stopping after this “Singularity.” Here’s the music video for “The Strive!"