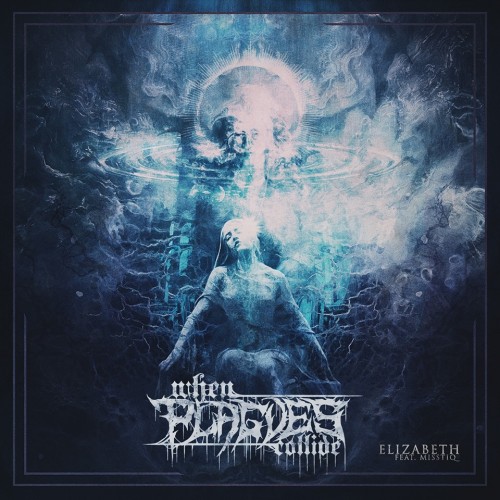 Review written by Glenn “Terra Shredder” Van Bockstaele.
When Plagues Collide is a Belgian symphonic deathcore band. Last November I reviewed their debut “Tutor Of The Dying” and both Stijn “Metal Shredder” and me were blasted away by the force of When Plagues Collide’s bombastic sound (read our review here: http://belgianmetalshredder.be/reviews/98). I gave the album 90/100 but in retrospect I admit that I should’ve given them more, especially after I saw them live in Zingem during the Wacken Metal Battle Belgium finals. Although they didn't win, they did premiere a new single called “Elizabeth” and it was a fucking great tune!
Now I’ve got the honor to review it and damn, this song is killer! Beginning with operatic piano (handled by Australian pianist Misstiq, who is specialized in providing adequate piano tunes to deathcore tracks) as well as violins before marching drum beats and soaring guitar riffs join in. All the while the song gradually builds up tension and eventually explodes into the usual When Plagues Collide sound! Strong deathcore breaks, pounding drums and screaming guitars. The vocals vary between guttural growls and screeching screams and the excellent lyrics (dealing with sexual abuse within the Catholic clergy) are sung in perfect rhythm with the underlying blast beats, giving this single a rollercoaster pace. There’s a short cool down in the middle wherein the vocals are slightly more natural and the piano takes center stage before things viciously speed up again! And eventually, after the final, double-entendre lyric “And getting nothing but the blessing of their father” we get one short but powerful breakdown before the piano soothes out the unrelenting deathcore violence!
A hellish orchestral deathcore single with a painfully contemporary theme! For this single When Plagues Collide once again unleashed their entire symphonic deathcore arsenal and I admit that with this “Elizabeth” tune they’ve done a better job than ever before. Everything is just that bit more tightly written and sounds just that bit more ferocious! Enjoy this new piece of savagery here below, courtesy of Chugcore Promotions!
95/100