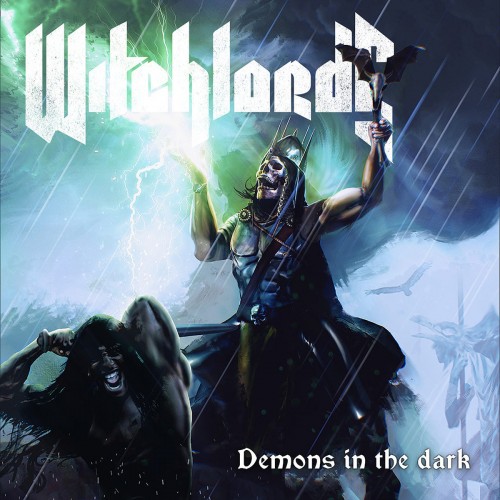 Some time ago I was contacted by Witchlords’ frontman Kristof Dedene to check out his band debut release “Demons In The Dark.” He also plays guitar in the classic metal band Point Fifty (whose latest release we covered in this review: http://belgianmetalshredder.be/reviews/127 enjoyable stuff) and I tend to believe he discovered our webzine through that particular article. Anyway, enough fan theories, time to shred this set of power metal tunes!

“Demons In The Dark” is the first album from Belgian power metal band Witchlords, formed in 2018. It’s an independent 30-minute release that ticks off plenty of the classic power metal boxes. Short and fast-paced songs with high-pitched vocals, plenty of technically impressive guitar solos and galloping drums that really got my blood pumping and my head banging. In terms of vocals, Kristof does a very fine job. Like a true bard he sings tales of heroism and bloodshed with a varied vocal range that goes from snarls to banshee screams and everything in between. He has a very passionate and expressive quality in his voice and it kept me thoroughly engaged.
Now, the one thing that’s truly missing to make Witchlords’s sound complete is bass. There’s no bass on this album whatsoever and sometimes this issue sticks out its ugly head. Fortunately, Kristof and Thomas put their own individual strengths on full display (which I mentioned in the previous paragraph) and they also sparingly use dramatic choir samples to add to the cinematic atmosphere of their sound, expect for the Hans Zimmer Inception horns at the beginning of the album (which was cheesy as hell and didn’t serve any real purpose expect for maybe the “roll the dice” quote that could function as a D&D reference). Still, those few issues didn’t hamper me for greatly enjoying this album and I believe any power metal or high fantasy lover can equally appreciate the work this dynamic duo has put out here given their practical limitations.

The whole album delves into the high fantasy worlds of such iconic brands as Conan The Barbarian, Dungeon & Dragons and the books of J.R.R. Tolkien. So expect songs dealing with orcs, demons, guests for gold & glory and tales of sword & sorcery. The songs certainly fit well when playing a D&D campaign or while watching a movie like The Lord Of The Rings trilogy. Personally, I think I’m going to listen to the album while playing the old-school high fantasy FPS games Amid Evil or Heretic! Blasting weredragons and sabreclaws to smithereens with the latter game’s Hell Staff or a tomed up Ethereal Crossbow sounds like a lot of fun while blasting these tunes!

Track 8 “Slaughter” is an epic pur sang power metal tune! Kristof’s guitar riffs are catchy and sharp, his vocals soar throughout the tune and Thomas’s beats gallop along nicely! No samples or cheap gimmicks, just a badass slaughter hymn. The opening title track “Demons In The Dark” is very catchy and the song “The Horde” is probably the most movie-like tune on this release, thanks to the effective use of samples!
The weakest tracks on “Demons Of The Dark” are clearly the songs wherein the lack of bass is truly missing such as in “Hero’s Fate.” It isn’t as cinematic a tune as many of the other tracks on the album and as a result the bass empty sound becomes painfully clear.

7 D&D dices out of 10. Although I could slam this album for its lack of bass and bare-bones production I’m a huge believer of the philosophy “the whole is greater than the sum of its parts.” And those two weaknesses aside, I felt Witchlords’ debut to be a well-written and energetic release! With limited resources, Kristof and Thomas still managed to craft a nice first impression with excellent guitar work, expressive vocals, powerful drums and an excellent high fantasy atmosphere. And now that they’ve got a second guitarist and a bassist among their midst, they’re working hard on the sequel! In the meantime, here’s the LOTR’s iconic Helms Deep battle with Witchlords’ “The Horde” song playing along! Enjoy but remember, they’re taking the hobbits to Isengard!