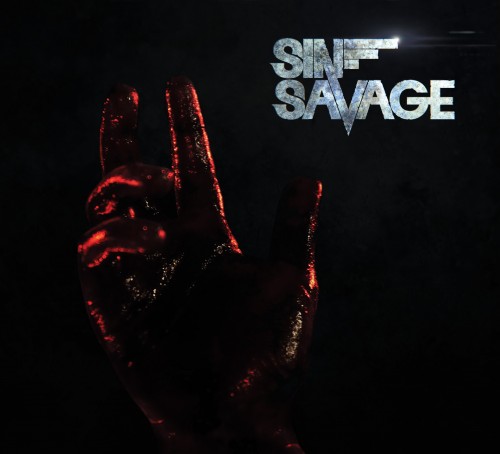 I first met Sin Savage (then known as Nightmare BE) during the second edition of the glam, sleaze and hard rock festival Wildfest in 2017 where I interviewed them (READ IT: http://belgianmetalshredder.be/interviews/82). Two years later the band reincarnated into its current form and I was contacted by frontman Zan to check out their “debut” EP, Lost In The Dark! Also my buddies at Hardlife Promotion gave me this EP to check out! Time to shred this delicious darkness!

Sin Savage was formed earlier this year from the ashes of Nightmare BE and most of its lineup (which are Zan on vocals and guitar, Jasper on second guitar and Vassili on drums) is retained while the young Andreas performs the 5-string bass duties. If you’ve enjoyed this trio’s work as part of Nightmare BE then you’ll certainly hear some similarities when you’re going through their first outing as Sin Savage. Zan’s vocals retain that same youthful energy but he does sound slightly harsher in this release. Both he and Jasper still bring out beautiful guitar riffs, Vassili slams his drums with his usual ferocity and Andreas’s bass lines spice everything up nicely! You can feel that those guys (not including Andreas for obvious reasons) already have a good chunk of experience under their belts and their mutual chemistry shines through this entire 15-minute release. All four band members, experienced and new talent alike, know precisely what they’re doing and they’ve evolved their sound and feel to great effect.
What makes Sin Savage different from Nightmare BE is in the overall power that they now push forward. Lost In The Dark’s title track in particular is faster, tighter and heavier compared to their earlier work and the overall atmosphere is darker as well, especially during the final track “Through The Gates,” which is slower, more cinematic and has a fun doom metal vibe to it. And that brings me to the next main difference between Sin Savage and Nightmare BE. The overall variety. When they were called Nightmare BE, Zan and his fellow gentlemen mainly stuck to radio friendly hard rock. Their first four Sin Savage songs, however, all feel unique from one another and are equally fun. Their title track is a pounding rollercoaster with plenty of speed metal tendencies, the song “Hot On Your Heels” is the classic sleazy hard rock tune (and in fact is the most reminiscent of their old material), there’s an instrumental called “Down On The Ground” with multiple guitar solos and marching bass and drum beats that reminded me of classic Iron Maiden and finally there’s the aforementioned “Through The Gates” with all of its grim epicness.

The front cover shows a bloodied hand that has just snapped its fingers and in doing so destroyed half of all life in the universe! OK, I admit that my inner geek was instantly triggered when I laid eyes on Lost In The Dark’s artwork! But I also admit that I love the use of darkness and various shades of red. It varies between wine red, blood red and everything in between. Sin Savage’s logo itself is made in a nice silver metallic font with a touch of rust. I really would love to see it shine in the dark, that would certainly look epic!

Without a doubt, the EP’s opening title track “Lost In The Dark!” Zan had sent me this tune well before the EP’s eventual release and I was instantly hooked. It features the catchiness of the Nightmare BE track “Running Away” (my personal favorite song from that era) and adds a ton of finesse and pepper to it! Lovely stuff!
If you’ve followed me for a while you may know I’m a huge sucker for instrumentals and the 2:44 min track “Down To The Ground” is certainly a sweet track. But I really wished it were a couple minutes longer and I also felt it ended rather abruptly. Too bad, since all the other tracks had a satisfying ending (particularly the EP’s last song with its orchestral finale). That’s pretty much all the negative stuff that I could say about this EP. Time to put on my gauntlet! The score for this EP is inevitable… and I am Metal Shredder!

8 Infinity snaps out of 10. If you’ve enjoyed them as Nightmare BE then you will certainly love them as Sin Savage! The band has retained their strengths from their first incarnation and added much spicy variety to their current, rebranded product. If you felt they were too generic as Nightmare BE then you’ll be pleasantly surprised by their freshly unleashed sinful savagery! Lost In The Dark is a short but awesome little gem that I can warmly recommend to every music fan looking for a good heavy swing! And if you fear that this EP won’t make you feel so good, then the music video for its title track will beg to differ!