We’ve both come a long way. 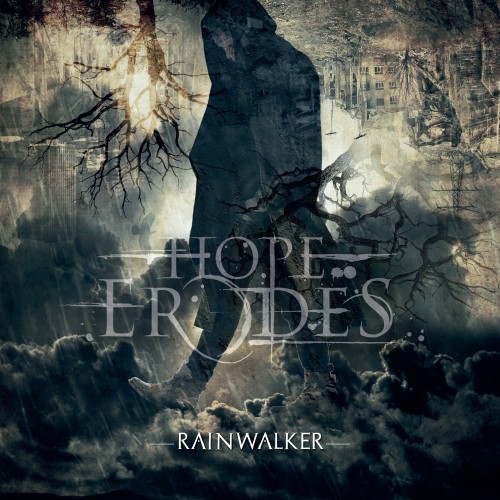 Hope Erodes was one of the earliest bands I shredded back in 2015 when I began practicing the art of shredding (http://belgianmetalshredder.be/interviews/33). I liked their style of metalcore quite well back then and now, four years later, I’ve become a little older and (maybe) wiser and Hope Erodes have some new material for us to enjoy!

“Rainwalker” is the second EP from the Antwerp-based metalcore band Hope Erodes, it succeeds their 2014 debut EP “Lost To Supremacy” and is another independent release. In those five years they changed vocalists (this time experienced metalcore frontman Sam Goffin picks up the mic) and bassists (now Jelle Sterckx from Waves Of Decay takes care of that rhythm part). In case you’ve listened to Hope Erodes’ earlier outing then “Rainwalker” will feel both familiar and fresh. The band plays a very rhythmic style of metalcore that frequently slingshots between classic metal melody and pounding hardcore beats.
Compared to their “Lost To Supremacy” debut, Hope Erodes now put more emphasis on melody while the now less frequent hardcore elements are overall faster and tighter than before. Newly recruited vocalist Sam does a splendid job here. Like his predecessor (who was Kris “Brutal” Lenaerts) he switches between hardcore shouts and death metal grunts. While Kris was a more classic hardcore singer, Sam’s style is more death metal oriented, using plenty of raw grunts with only a few lines of clean shouting. As for the other guys, the Hope Erodes guys have improved on their work from “Lost In Supremacy” by playing a stronger, faster and more balanced sound. The main elements that made me like Hope Erodes to begin with are still here. The energetic guitar work (Arun plays some really sweet solos in this release), the headbang-inducing drum beats, the skin-shredding rhythms and of course the aforementioned harmony between old-school metal and modern hardcore. It’s all here and everything packs a damn good punch.

Not only the production values but the logo and cover art also got a sweet upgrade in this new Hope Erodes release. Hope Erodes’ new logo has a nice, hand drawn quality to it compared to the cheesy old English font from their debut EP. And this time they’ve provided us with some good looking cover art as well, featuring a black cloaked figure wandering on a series of clouds while an inverted city landscape “hovers” above. A beautiful piece of art.

My top pick goes for the opening track, “Otium.” As soon as the metalcore beats gradually faded in I knew that this underrated metalcore band was back in action! This whole track has a great tight and upbeat feel to it, as if Hope Erodes are celebrating their own comeback. And I also enjoyed the final track “Kriegswaisen” a hell of a lot! It’s a two-faced, six-minute tune that begins as energetic thrash/death metal before the song transitions to deathcore, dominated by a thunderous breakdown as both the song and EP come to a very satisfying close.
So what's the worst part of “Rainwalker?” Well, like “Lost In Supremacy” before it, this is another short EP (clocking in at about 20 minutes) and after their well-received first release I was expecting Hope Erodes to put their heads together and make a full-length. In any case, I’m happy they’re back in action and let’s hope it won’t take another five years for them to come up with a debut album! As for their second EP, it gets a colorful…

7,5 rainbows out of 10! Like it’s 2014 predecessor, Hope Erodes’ “Rainwalker” is a short EP, but what’s here in quality does certainly stack up to the lack of quantity. Hope Erodes have upgraded their look and feel and they stand stronger than ever before. So if you’re looking for a competent band that successfully balances classic metal riffs with hardcore beats, then Hope Erodes certainly is one band worth checking out! Now I hope to see them perform again soon. It’s been three years since I last saw them perform, and we’ve both come a long way since then! Here’s the EP’s official teaser.