There are no endings. Here are only beginnings. 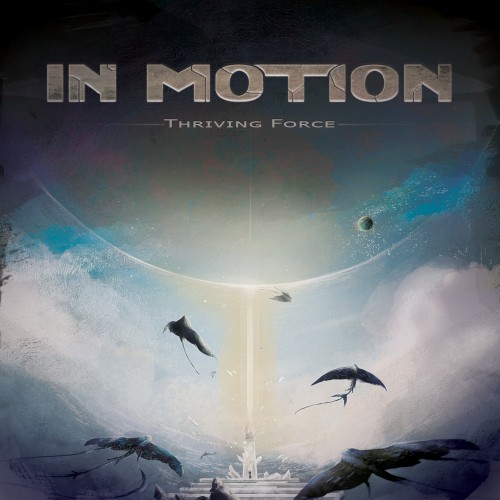 In summer 2018 I met up with Tom “Tee” Tas during a unique gig in a church in Lokeren where he performed as part of 23 Acez, one of his currently active bands. Since then I reviewed several albums he played in and a week ago I was invited to a press event at the Crossover Music Pub in Ghent to check out the first release from his latest solo project called In Motion. A warm reception, a couple of good snacks and drinks, an exclusive early showcase of the In Motion album and a free copy of said album later and it’s time for me to shred this gem!

“Thriving Force” is the first album from In Motion, a solo project from Belgian guitarist and songwriter Tom “Tee” Tas, known for his work in various metal bands including Thorium, 23 Acez, Quantum Fantay, Neo Prophet and Ostrogoth. Last summer Tom already released an album from his other solo project Entering Polaris, a great release that I highly recommend (check my review of that album: http://belgianmetalshredder.be/reviews/85) Both Entering Polaris and In Motion albums consist of material Tom has written over the past several years and which he considered stylistically incompatible with the bands he actively performs with. Both albums are released through the Dutch record label Freya Records. Compared to Entering Polaris, which was mainly focused on uplifting power metal with progressive elements, In Motion’s material is faster, heavier and inspired by thrash and death metal.
There are, however, a few things that both projects share with each other. First off, Tom’s guitar work, if you’re familiar with his appearances in other bands than you will certainly hear Tom’s “character” throughout the “Thriving Force” album. His typically soaring guitar solos, the lengthy progressive metal instrumentals (working as well-timed cool downs to the heavy beats dominating the album), the poetic lyrics dealing with such topics as the creation of life, the mysteries of the cosmos and mankind’s desire to explore it, the death of the old and the birth of the new, etc.
Another trait shared between Entering Polaris and In Motion are the many different vocalists Tom hired to speak out his words. These guests include the likes of Björn Strid (Soilwork), Mike Slembrouck (After All), Jeffrey Rademakers (Spartan), Sindre Nedland (In Vain) and David Davidson (Revocation) among others and all these guys do a tremendous job in complementing the songs they appear in. It also results in a plethora of vocal styles, guttural growls, frantic shrieking, operatic singing and on several occasions a clean vocalist will duet alongside a harsher one to great effect.
And if all that wasn’t enough variety already, there are also a few violin, acoustic guitar and even saxophone sections in this album. Tom really put out all the stops to make the album’s long songs as interesting as possible. Many songs, such as “Thrive,” “Utopia” and the 18-minute epic “Always In Motion,” feel like 2 or 3 songs put together into one consistent whole. And it all leads to excellent results!

Like Entering Polaris before it, In Motion employs bizarre but very stylish artwork. This time everything is covered in shades of blue and I’m having a hard time figuring out whether this scenery is in space or underwater because of the sea like colors as well as the ray-like creatures floating around. One funny bit about the album’s artwork is a cameo appearance from Tom’s pet dog, on one of the pages of the album’s booklet you can see his dog awkwardly flying around with its head safely concealed in a scuba/astronaut like helmet.

My respects go to the 18-minute track “Always In Motion.” It rarely happens that a track of this enormous length is able to keep me interested all the way through but this is one of them (other marathon songs capable of keeping me hooked that long are Iron Maiden’s “Empire Of The Clouds” and Nightwish’s “The Greatest Show On Earth”). Tom’s extensive creative arsenal is on full display here! Thrash and death metal riffs tag team with progressive and meditative sections, natural vocals with rough grunts and the classic metal instrumentation gets diversified with classic guitar and it all ends in a jazzy saxophone session.
Worst bits about In Motion? Well, it’s too bad that we most likely won’t ever see the In Motion material being performed live. Like Entering Polaris before it, In Motion is an ambitious but 100% studio-exclusive project. But then again, never say never. After all, it took Arjen Anthony Lucassen more than 20 years before he was able to present his Ayreon material live so there’s always hope. But in the meantime, we can enjoy the recordings, but first…

9 extraterrestrial rays out of 10. Tom promised a heavier and equally ambitious sister project to his 2018 Entering Polaris brainchild and all things considered, he succeeded! Every aspect of In Motion is handled with genuine passion and care, focusing on thrash, death and progressive metal, all represented by experienced musicians and all strung together with Tom’s signature guitar work. If you’re a fan of any of Tom’s bands, whether it’s the hard rock from 23 Acez, the 80s metal of Thorium or the space rock from Quantum Fantay, it doesn’t matter, In Motion is a must-have! Here’s the lyric video for the song “Utopia.”