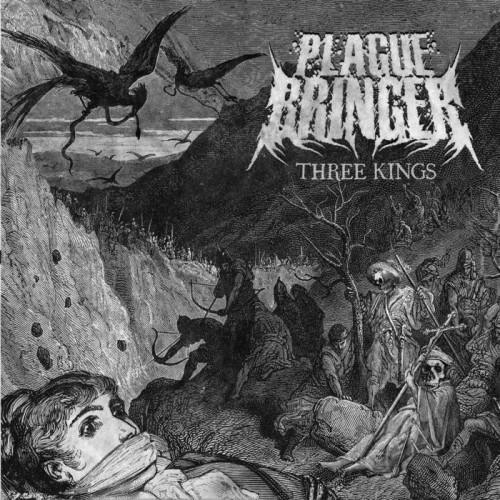 Review written by Glenn Van Bockstaele.
A while ago we got contacted by the Canadian melodic blackend death metal band Plaguebringer to check out their 2017 debut EP “Three Kings.” A short 13-minute release but it’s a damn good one! After a moody piano intro the band fires off all cylinders with the track “Malificarum.” A massive opener reminiscent of the Black Dahlia Murder (in particular Diaro’s vocals sound very close to TBDM’s own Trevor Strnad) featuring ferociously fast drum beats, multiple guitar solos and even some metalcore inspired tunes, all put together to create a dark, epic spectacle. And after a short ambient interlude the band jumps into “Queen Of Midnight,” continuing the same type of sonic fury as in the preceding track, leaving nothing in their wake. Hell, they even included a short bass solo in this song (I think Plaguebringer’s sound can thrive even better with a bit more bass). And finally the title track of “Three Kings” kicks in with the band going for a short and lightning fast song, bringing out the guns one last time and having singer Diaro shrieking, grunting and screaming his damn lungs out as the EP enters into sudden death!
I’ve got to say that despite the EP’s very short length, Plaguebringer’s first release left a huge impression on me. The EP is basically one long song split between 4 tracks (intro included). Personally, I’d describe their sound as melodic blackcore, taking elements from metalcore, black metal and melodic death metal all put together to create a chaotic yet also surprisingly well structured and multilayered sound. It’s sophisticated brutality and I’m very glad the band took the opportunity to contact us to check out their work. Plaguebringer will be releasing their first full-length release “Diabolos” on February 16 and I’m already looking forward to it. But in the meantime, you can already warm yourself up by checking out the full “Three Kings” EP here below, brought to you by the folks of Plaguebringer themselves!
85/100