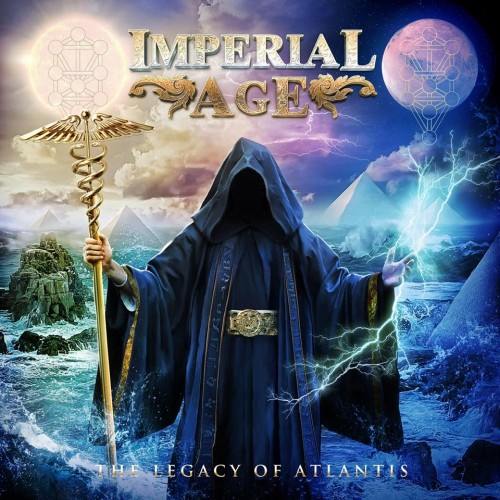 Review written by Glenn Van Bockstaele.
Imperial Age is a Russian symphonic metal band formed in 2012, that same year they released their first album called “Turn The Sun Off” as well as an EP called “Warrior Race” in 2016. Last October they brought their successor to the Benelux (this album was first released in February 2018) called “The Legacy Of Atlantis.” The album is released through Swedish record label Adulruna.
The album kicks off with “The Awakening,” a powerful and catchy opener filled to the brim with typically symphonic metal elements. Then comes the cinematic title track of “Legacy Of Atlantis,” which is more guitar centered and with a lot of choir singing. Then comes “The Monastery,” a beautiful and less bombastic track with flute, harp and an epic guitar solo from Pavel. Up next is “Life Eternal,” a similarly styled track compared to “The Monastery” but this time with more choir singing.
The album’s fifth track, “Domini Canes,” returns to the orchestral furor from the first two songs and this time tenor Alexander employs his wide vocal range to great extent. The next song, “Love Eternal,” ventures back to a more soothing atmosphere with male and female vocals singing either in duet or in harmony. Then comes “The Escape,” a fast, upbeat and slightly folk and power metal tune, but of course still having the typical choir chants that are so prevalent in Imperial Age’s music. The following song, “Islands In Time,” is another track with a gentle start of piano and flute before the guitars, drums, orchestra and chants kick in. Similar stuff to what I’ve already heard multiple times throughout this release. And finally the track “And I Shall Find My Home” provides another piece of orchestral chants combined with fast paced riffs and beats that nicely wrap up the album.
One thing I personally dislike about the album is singer Alexander’s tenor vocal style. Many times throughout the album he sounds highly aggravated, especially when he’s singing on his own. I believe him singing in a more natural sounding voice would be more enjoyable to listen to, as he shows in the “Domini Canes” track. As for the sopranos Jane and Anna, their voices are better suited for Imperial Age’s overall sound as they carry a classic female-fronted symphonic metal vibe. Vocalists aside, the band manages to successfully create a cinematic, larger-than-life atmosphere using various instruments like violin, piano, flute, harp, fast drum beats and excellent guitar work. It all feels very Russian (despite the English lyrics), operatic and even slightly militaristic. Although I felt the album to be a bit repetitive and too over-the-top for my taste this is still a fun symphonic metal release for everyone who’s into this particular subgenre. Here’s an officially recorded live performance of Imperial Age playing the album’s final track, “And I Shall Find My Home.” Also be sure to check out the band’s official website (http://www.imperial-age.com) to download some of their songs for free.
65/100