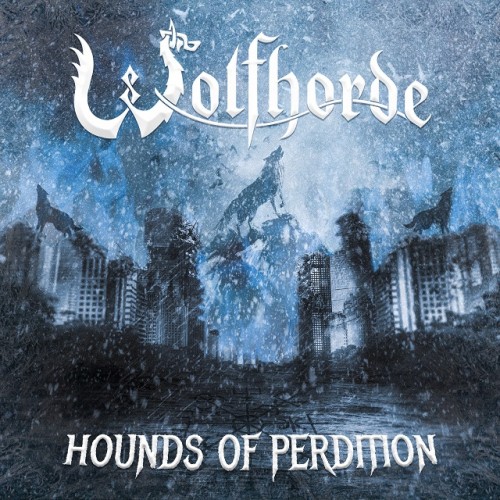 Review written by Glenn Van Bockstaele.
Wolfhorde is a Finnish folk black metal band formed in 2001. Despite their lengthy existence, “Hounds Of Perdition” is only their second full length release, succeeding their 2016 album “Towards The Gates Of North” and is also released through Finnish record label Inverse Records. The album starts off with “Chimera,” an opener going well over 9 minutes but, like the fearsome creature from Greek mythology, this track is a multifaceted hybrid of melodic metal riffs, orchestral chants, folk flute and symphonic keyboard tunes all played in beautiful harmony. A truly mystical atmosphere that reminds me a lot of their countrymen named Wintersun. A lengthy and spectacular start of the album!
Then comes “Doctor Of The Plague,” a much shorter track and one of my favorites on the album! Starting with heavy marching beats before turning into a joyful folk song. Unfortunately the song does lose some of its charm because of Hukkapätkä’s occasional use of clean vocals. They feel forced and unfit for the song as a whole. Fortunately, his clean vocal chords sound a lot better starting with the next tune, “Black Song.” Another upbeat folk and symphonic track and this time Hukkapätkä’s clean singing sounds more natural and balanced in tone for a more suitable and enjoyable experience. The album’s fourth track, “Towers Of Silence,” is a song sharing many traits with the preceding two songs but this time more emphasis is put on Wolfshorde’s orchestral side with bells, guitar solos, choirs, violins and blast beats. A bit like Ensiferum. Then comes “Forged In Ice,” beginning with a gentle acoustic melody before going for another set of bombastic tunes as well as clean and harsh vocals singing either in harmony or in duet. The song has a medieval quality to it and once again Ensiferum comes to mind every time I listen to this track. Up next is “Kill The Light,” a fast power metal tune with catchy, soaring vocals and a nice bit of violin (functioning as a guitar solo) being played alongside vicious drum beats.
And then comes the finale, the 11-minute title track of “Hounds Of Perdition!” A track that summarizes all the stuff you’ve heard earlier in the album, fun folk melodies played alongside or in turns with solid heavy metal riffs. Vocal styles that range from clean singing to grunting and shrieking and of course choirs. Guitars and drums along with flute, violin and harp. It’s all here! And there you have it, with this second album Wolfhorde shows a very multifaceted sound that can be played around a campfire, at a medieval themed party, when charging into battle or just live on stage in a good old rock or metal venue! Now come and enjoy the music video for the album’s second track, “Doctor Of The Plague!”
85/100