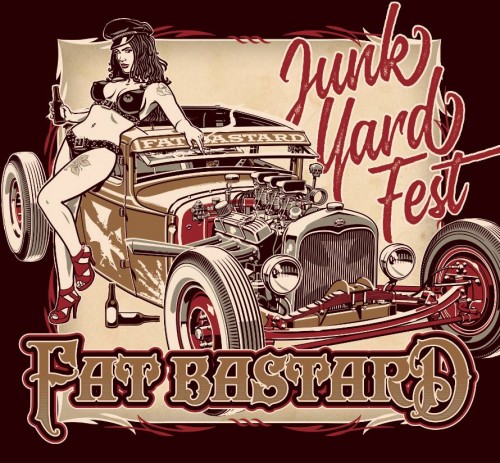 I first got into contact with Fat Bastard in late 2017 when they participated for the Wacken Metal Battle Belgium 2018. They eventually made it to the semi-finals and gave a rock-solid performance as well as giving me their 2013 debut EP “Bring The Pain.” Now they’re back with new and improved material, sent to me by Svnday Promotions. Thanks a lot, fellas!

Junkyard Fest is the second EP from the Belgian hard rock act Fat Bastard and is an independent release. It consists of seven tracks for a good 22-minute playtime with the band taking musical inspiration from the likes of Motörhead, AC/DC and Guns N’ Roses. A radio-friendly, guitar-heavy and upbeat sound. Some songs like “Dead Mean Charlene,” have catchy lyrics while others like “Blood, Sweat And Beer” are more frantic and very suitable for headbanging. One exception is the slow, dark heavy metal tune “Dead Man Walkin.” Not the most effective use of Fat Bastard’s traits, but a well-written song nonetheless, especially compared to my pick for the weakest track on Junkyard Fest.
There are two elements of Fat Bastard’s sound that I particularly love. For one, the beats from drummer Kurt provide a great rhythmic foundation for the other guys to play along to, his drum lines are well mixed and sound very powerful. And what’s the other aspect? Jorn’s vocals! He’s got a clean yet very greasy style of singing, like a redneck who’s had a few beers and a juicy steak fresh from the barbeque right before recording his lines. Sure, his vocals lack some range and you may think he’s burping all the time, but I like his style as it perfectly complements the EP’s atmosphere. And speaking of…

Everything on the Junkyard Fest EP, from the visuals to the lyrics breathes American biker culture. The beer chugging, cigarette smoking bikini chick and hot rod on the sepia colored cover, the lyrics about bourbon drinking, hot girls and riding out on the highway, it’s all here. And with the simple yet effective guitar riffs, galloping beats and Jorg’s oil greased vocal chords this Harley Davidson atmosphere is certainly achieved.

My top pick goes to the awesome combo of “Hotrod Summer” and “Road Runner.” “Hotrod Summer” is a pulse pounding, Motörhead-esque track made for some vicious headbanging and by means of a short drum transition, it perfectly moves into the power chords of the “Road Runner” track, making both songs feel like one seamless track. It’s a beautiful showcase of Fat Bastard’s musical strengths.
The weakest track goes to the second song, “That Girl Was Hot.” While it had a strong start the band eventually loses a good chunk of steam as the track progresses. Jorn goes for some horny mumbling in the middle part of the track and a bit of awkward laughing at the end. Pretty lackluster stuff compared to the other songs on this release. But the whole is greater than the sum of its parts, so here goes…

7,5 Harleys out of 10. Fat Bastard’s second EP is a short but enjoyable ride driven by five guys with a genuine passion for all things fast, heavy and alcoholic. The sound on “Junkyard Fest” isn’t anything new or groundbreaking, but it’s a sound with power and potential that’s easily enjoyable for most rock and metalheads out there. So take out your beer or bourbon and enjoy the lyric video of the EP’s final track, “Blood, Sweat And Beer!” Rawk N’ Roll, baby!