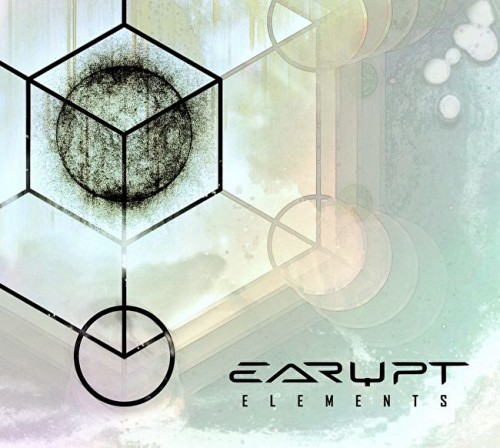 Earupt is a Belgian progressive, groove, alternative metal band, now bringing us their second full release after starting out with a well-received first album named “Belief/Relief” in 2014. Once again, this second Earupt album is an independent release. The album launches into your eardrums with “Shedding Skin,” a groovy headbanger with a catchy chorus and a lengthy and epic instrumental middle part. An excellent warm up and an accurate taste of things that the band will be bringing to the sonic table from that point onward. Up next is “Bloodstain,” a more frantic song with some thrash metal inspired sections. Then comes “Hooked On Life,” another straightforward metal tune and this one truly showcases vocalist Rick’s varied range. He employs operatic singing, raw vocal lines and more with great natural gusto.
The album’s fourth song, “Bareknuckle Fight,” is more groove metal oriented and because of its aggressive and highly rhythmic feel this particular tune has the potential to become a badass moshing track even with the weird and slightly out-of-place guitar solo near the end. Then it’s time for Elements’ title track and this is one of the standout tracks on this album. The riffs and beats thunderously march their way into your head as the band pays tribute to Mother Nature and her four elements by means of captivating lyrics and one of the longest instrumental sections in the entire album! After that six-minute epic comes one of the heaviest songs on the album, “Rebellion,” a full-on thrasher with a typically anti-establishment theme.
The seventh track, “Writing On The Wall,” is a pretty short track, clocking in at "barely" 4 minutes while most of Earupt’s material on the Elements album reaches well over 5 minutes playtime but it still manages to keep all of Earupt’s characteristics, be it in a more concise form. The penultimate track, “Broken Wings” is the longest track on the album. Starting with an upbeat and combative first part that encourages intense headbanging and moshing before entering a middle section that’s more laid-back but with a slight foreboding feel and finally the heaviness from the first part returns to bring this tune to a close! And then comes the album’s final song, one last catchy, straightforward track that’s enjoyable but isn’t that great of a closer compared to the “Broken Wings” track.
As a whole, Earupt can easily be described as old-school groove metal with elements of thrash, alternative and progressive. It feels familiar, yet also refreshing. It’s old-school but with an experimental edge. It’s easily listenable yet also profound in its lyrics and melodies. Some of the songs on “Elements” put more emphasis on speed and thrash, others are more vocal and classic heavy metal oriented. But the main elements of Earupt always remain. Lengthy songs that keep you engaged thanks to the catchy vocals, progressive instrumental parts and an overall great sense of melody, rhythm and power, even without bass lines! Yup, Earupt has no bassist and, for the most part, they don’t need it anyway! Rick’s catchy and powerful vocals, Tom and Walter’s extensive technical guitar melodies and Thijs’s pulse-pounding drum beats get the job done all by themselves. And the results are more than enjoyable for every rock and metalhead out there. Earupt is a band well worth checking out and so we’ll now be treating you to the lyric video of “Hooked On Life!”
80/100