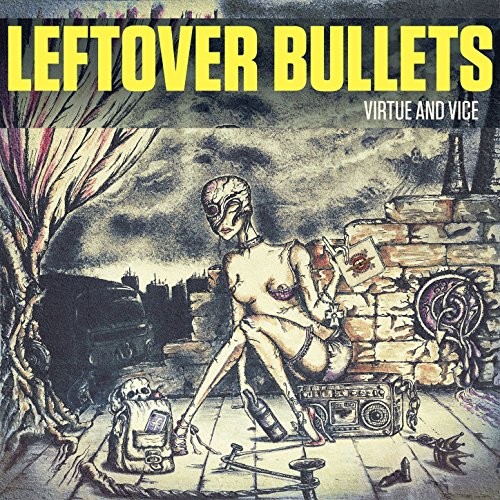 Leftover Bullets is a Greek hard rock band formed in 2013. Recently the band sent us their debut album “Virtue And Vice,” released on November 2016 through Greek record label Final Touch Records. The album starts off with the juicy bass lines of “While I’m On The Road,” an upbeat track with a huge 80s hard rock vibe. That same feel continues into the next song, “Feeding The Flame,” but with a more glam metal atmosphere, not unlike Mötley Crüe. Up next is “Weak Link,” a more modern and guitar oriented song featuring some great solo work from guitarists Giannis and George. The fourth track, “Out Of Control,” is a slow, bass heavy biker anthem that reminds me of Saxon. Then it’s on to “80s Child,” a catchy celebration of 80s rock and metal culture written in the vein of a classic Judas Priest rock anthem.
The sixth track on “Virtue And Vice” is the Guns N’ Roses inspired power ballad “Bleeding Time” and like the aforementioned rock legends this track shows Leftover Bullets maintaining a slow yet very intimate and powerful atmosphere throughout its lengthy playtime. Things get faster and more upbeat again in the following song, “Teen Spirits Gone.” My personal favorite track on the album because of its catchy chorus, epic guitar riffs and self-referential theme as the band admits that they’ll always remain a bunch of kids playing rock n’ roll. A song with huge live potential. Up next is “Virgin Queen” and features Leftover Bullets going back to a more glam metal style and theme about sex and women. A cheesy but still enjoyable song. The album’s penultimate track, “Blind Myself,” a slightly experimental sci-fi themed metal tune with riffs and bass lines that remind me of Iron Maiden’s 1986 classic album “Somewhere In Time.” And finally there’s “Might Be Miles Away,” a lengthy final track with a brooding, combative atmosphere (sounding a bit like our fellow countrymen from Diablo Blvd.) and slow, hard pounding beats and wrapping up with a short piano melody.
All things considered, Leftover Bullets’ 2016 release is a varied and enjoyable hard rock album ideal for people nostalgic about the 1980s rock scene and those who love to hear something inspired by the likes of Saxon, Mötley Crüe, Guns N’ Roses or Judas Priest. Catchy lyrics, sweet guitar riffs and upbeat rhythms, it’s all here! The band will be releasing a new album in April 2019, but for the moment you can enjoy the beautiful throwback track “80s Child."