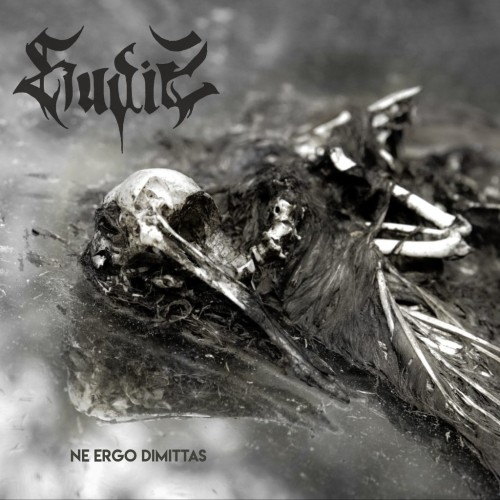 Hudic is a Belgian blackend doom and death metal band from Heist-Op-Den-Berg but originally formed on the metallic shores of Slovenia. The word Hudic means devil in Slovenian. Their debut EP right here is an independent release. The EP starts off with the sounds of a campfire and howling wolves that eventually transition into an orchestral opening tune alongside guitar riffs and drum beats that play the same tune, all in perfect harmony. I’ve got to say, I was pumped! Then the opening melody of “Loud Silence and Bright Darkness” goes smoothly towards “Dante,” a typically doom metal song with long, extensive riffing and a short but intense speedup in the middle. Not much else is happening during this song but it does manage to completely drag me into Hudic’s dark, hellish realm.
The third track, “Fall Of The Morning Star” is a whole different demon. Much faster pacing, heavier and sharper guitar melodies, occasional blast beats and deep grunts that make this a death metal artifact full of demonic power! On to Ne Ergo Dimittas’s title tune, a blackend death metal song with lengthy instrumental parts and vocalist K combining his typical grunts with harsh black metal shrieks and guitarists D and H playing some groovy new wave inspired riffs in the song’s middle part which give this track a more upbeat feel. And finally there’s “Collapsing Whispers,” a melodic death metal finale that even made me think of Amon Amarth with the attention grabbing barbaric grunts and the overall orchestral like melodies before finally exploding into one final barrage of blast beats and epic guitar work, leaving me begging for more!
All things considered, I’m pretty damn impressed by this young band’s first EP. Hudic’s debut is a short but very varied cocktail of doom, death and black metal with a groovy and sometimes even orchestral feel. Their music is engaging and atmospheric, the vocals are crystal clear yet still pack enough demonic vibe to further amplify the EP’s overall macabre feel. And given the pictures I’ve already seen from these guys, they also have a taste for the visual aspect. Coming on stage all dressed in dark monk robes and engulfing the stage in fire and darkness! Be sure to check out the cinematic music video for the song “Dante” here below!