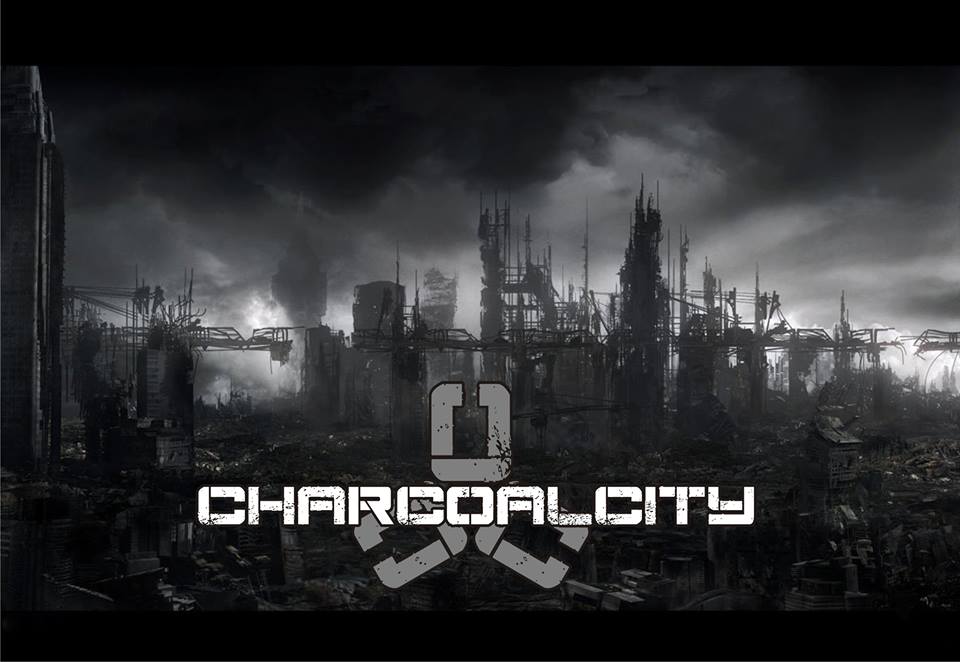 On March 2, 2018 I went to Jeugdhuis Asgaard to check out the industrial rock act Charcoalcity. A couple of years ago Hardlife Promotion introduced me to the band by giving me their debut release Greyscale. An album that I enjoyed a lot so I was very glad to meet up with Charcoalcity’s founder Peter “Deezee” De Zutter right after I arrived at Asgaard. Deezee and I discussed Charcoalcity’s origins, the making of Greyscale (which Deezee made pretty much all by himself) and the controversy regarding the music video for the song Leave (featured at the end of this article). Enjoy!

BMS: Tell me Deezee, how did you begin your Charcoalcity music project?

Deezee: I’ve been a musician for many years, playing in alternative rock cover bands as well as some original bands like Reno and Dog Man, but those bands had little success. During that time I was working hard on creating my own home studio until it was big and advanced enough for me to work on a solo music project and album which would eventually become Greyscale, the debut album of Charcoalcity. However, work on the album suffered a huge delay when I was the victim of a serious motorcycle accident. Fortunately, I made a full recovery and in fall 2016 Greyscale was finally released.

BMS: That’s right and I had a lot of fun shredding that little gem. I’m also very impressed by the fact that you made the entire album pretty much all by yourself. You wrote all the songs, recorded all the instruments, created all the artwork. Pretty impressive I must say!

Deezee: Thanks, man! I’ve got to say that the drums part was one of the trickier parts for me to record, since I didn’t have the space in my studio to put in a full drum recording set up. So I recorded the drum parts separately and then edited everything together in order to recreate a seamless drum track. And then I recorded all the other instruments and vocals. Another challenge for me during Greyscale’s production was the mixing, because I hadn’t done any mixing before. It is also the only thing on Greyscale that I didn’t do all by myself. I received advice from Jean-Paul De Brabander and as the album’s production went on my mixing skills improved greatly. And then I mastered the album at a friend’s studio in Aalst and finally I presented Greyscale to Hard-Life Promotion. BMS: And so your debut release dropped in my hands. I’d say your sound feels like a mixture between industrial and alternative rock.

Deezee: Yeah, you could say that. With Charcoalcity I wanted to make a heavy yet melodic sound that’s deep yet accessible and with catchy choruses. You could describe Charcoalcity as a marriage between Rammstein and the Sisters Of Mercy or a heavier, more metal oriented version of Gary Nüman. But one thing I always wanted to maintain in Charcoalcity’s material is a dark and grim atmosphere. Because let’s face it, the world isn’t doing all that well nowadays. Terrorism, religious extremism, overpopulation and our planet’s natural resources that are slowly but surely getting fully depleted. Those are topics I often think about and I want my music to reflect that feeling of impending doom.

BMS: Yeah, it’s a type of music that’s easily enjoyable yet has plenty of depth and meaning. So, what are your plans for the near future?

Deezee: I’m currently working on a new Charcoalcity album that’s scheduled for release this summer. Charcoalcity will also be featured on a couple of festivals this year so me and the guys are looking forward to it.

BMS: You currently work together with two additional musicians for your live performances, Timo De Vreeze and Anthony Hooft. Are they also going to do songwriting for the next album?

Deezee: Not for the upcoming release, however I do want to eventually get them more evolved with Charcoalcity’s evolution. For the moment I write all the songs and then I send them over to Timo and Anthony so they can rehearse them. I can tell you that I’m very pleased to work together with them to help bring Charcoalcity to the masses!

BMS: What other things do you do in life aside from Charcoalcity?

Deezee: I do vocals and guitar in a Foo Fighters tribute band called Food Fighters as well as in a alternative rock cover band called Use. I still love playing those classic 90s alternative rock songs and from time to time I appear on tribute festivals as one of those cover bands. I also build guitars myself, working for a company called Oakwoods Guitars (check them out at www.oakwoodsguitars.com). We build custom themed guitars, for example, the one I’ll be using for tonight’s gig has a rusty, low-tech look that fits perfectly for the dark steampunk atmosphere of Charcoalcity’s songs.

BMS: Is there anything else you’d like to share before I let you prepare for your gig?

Deezee: One story I’d like to share is regarding the music video for the song Leave (which you can watch below). The premiere of the video was shortly after the terrorist shooting at the Charlie Hebdo offices in early 2015. And since the song is about me condemning religious extremism and terrorism it did cause some serious controversy with people assuming I was anti-Muslim. That is not the case, I oppose religious extremism, not religion itself. So I hope this statement clears everything up. I don’t want people to get a wrong message about Charcoalcity! Charcoalcity’s music may be dark and brooding, but me and the guys want to give people a good time without making any huge political or social statements.

BMS: Thanks for the chat, I look forward to seeing you on stage!