28/02/2022
Stijn Daneels
Interview written and conducted by Stijn “Metal Shredder” Daneels. In late 2021 we were contacted by the Belgian progressive metal band ArtFx to check out their debut album “Turning Point,” which we promptly did and enjoyed a lot (read our review: https://www.belgianmetalshredder.be/reviews/340). Soon after, the band invited us to come to the townhall of their hometown Torhout to see them perform the album live as well as getting together for a chat. We talked about the band’s origins and the production of their debut album, their show at Stokrock and the creation of their own stout & strong beer.

BMS: Hi everybody, it’s great to finally meet ArtFx in person. So tell me, how was the band formed?

Tom: I have  played in about 17 music projects before I started ArtFx. I performed in a variety of music acts including pop, reggae, new wave, jazz, funk, rock, etc. Eventually I founded ArtFx along with our former guitarist Bart, with Ivo quickly joining in on drums. Then we recruited a vocalist and another guitarist but after a few rehearsals we recruited our current guitarist Dempsey. With that lineup we performed only one gig since the COVID-19 pandemic started shortly after. During the pandemic we decided to replace our vocalist with Elke and that’s how we got the ArtFx lineup of today.
Elke: I’m married to Ivo and I jokingly suggested that I should be ArtFx’s new vocalist. I wasn’t very confident that I would be getting the job since I had little experience in metal vocals. I was, however already following vocal coaching lessons from Sven Herssens from Fields of Troy. Not to mention that our previous singer was a grunter while I sing clean, most of the time. Ivo did suggest to the rest of the band to give it a shot and we agreed that I was a suitable vocalist replacement.

BMS: “That's great, so how did the production of your album Turning point go?”

Tom: When it comes to songwriting, we are primarily inspired by Meshuggah with hints of symphonic and thrash metal. We write songs quite dynamically, everyone in the band can have a say about the material and it’s not limited to the instrument of a respective band member. In other words, our guitarist Dempsey can offer suggestions about the drum lines while our drummer Ivo can share guitar riff ideas.
Ivo: Most of our ideas arise during a jam. Usually it’s Dempsey or Tom who start creating the patterns, the building blocks for the eventual songs and together we work, craft and judge our work both individually and collectively until a song evolves.

BMS: Excellent! What I noticed when I was listening to “Turning Point” again on my way here to the venue is how diverse it is. Some songs are fast and heavy, others are slower and more prog-oriented. The songs are also shorter and more concise compared to the usual length of a prog metal song, something I like a lot since longer songs tend to overstay their welcome with me. Overall, ArtFx’s grindy, metallic, sound reminds of Earupt, a Belgian progressive groove metal band that I’ve been a fan of for years now.

Ivo: Truth to be told, we don’t have a lot of boxes that need to be ticked off for a song to become an ArtFx song. We let the material organically flow together and consider it finished when we feel like there’s nothing left to add or remove from a given tune. One box that we do always want to tick off, however, is the balance box. We want everyone in ArtFx to make just as big a contribution to a song than the other member(s).
Elke: Being in a band is a very educative experience no matter how much or little experience you have as a musician. It’s awesome to encourage each other to experiment and work on each member’s strengths and weaknesses. 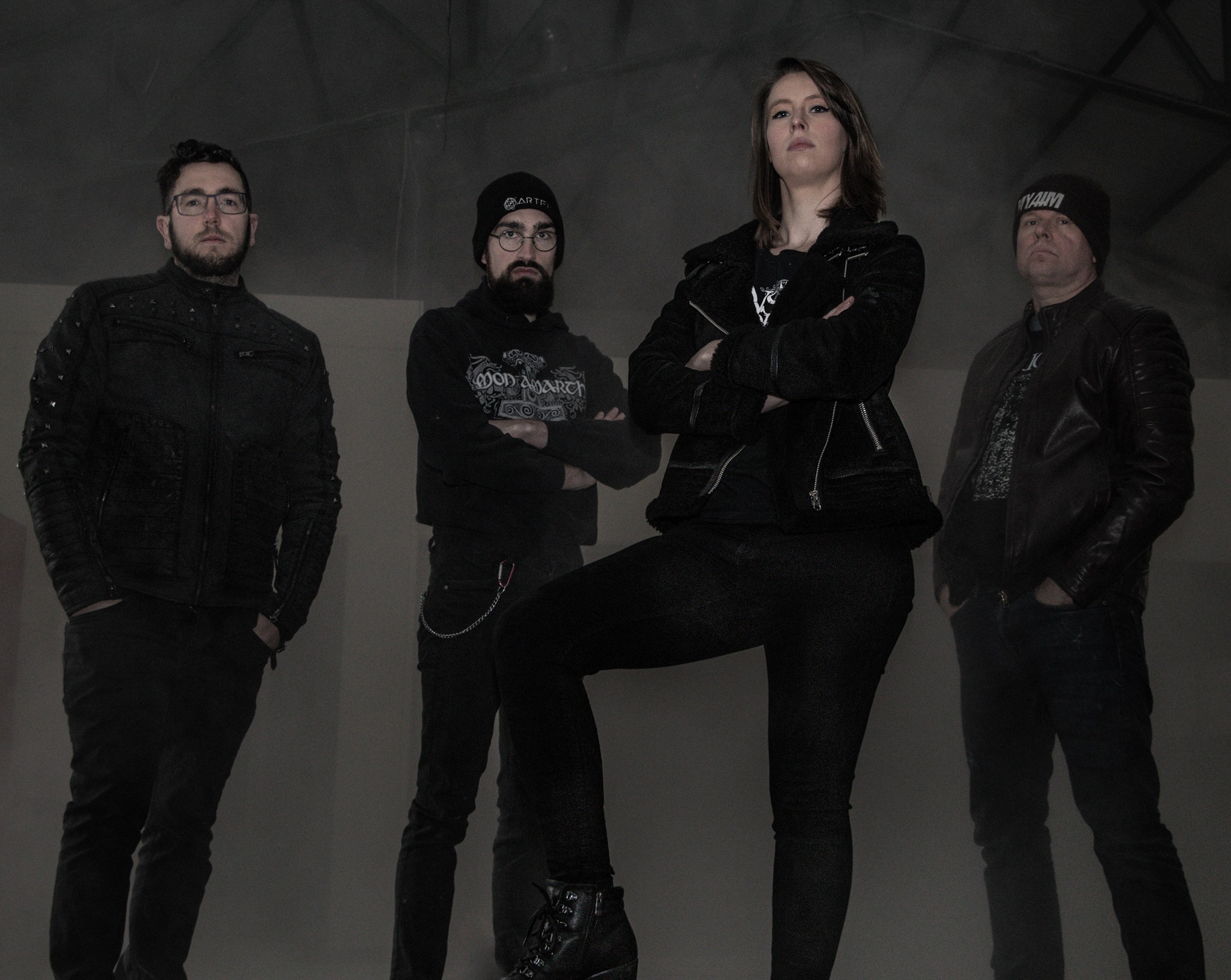 BMS: I’ve noticed that this is only your second gig with your current lineup. The first one was StokRock, right?

Ivo: That’s correct. The Stokrock event took place the Stokhove brewery here in Waardamme and served as the premiere for our “Turning Point” album as well as our own beer, which we had crafted at the same Stokhove brewery. It was a successful show and we played in front of about 200 people, a mere week before the next lockdown began. Our friend and brewer, Stefan, just joined in so you can ask him personally about the beer.

BMS: Great idea, tell me, Stefan, how did this tasty stout beer came to be?

Stefan: Hey there! I’ve known ArtFx thanks to Ivo who played in a band alongside my son. We created some drafts and after some tasting sessions. We ended up with this strong and fruity beer of 9,5 % alcohol volume.

BMS: And it sure is a great beer. I’m going to buy a pack of bottles after we are done here. So what are ArtFx’s future plans?

Ivo: We are working on new material and we will be performing a song  that’s not on “Turning point” Other than that, we keep on building on the ArtFx formula and expanding our fanbase.
Elke: As long as we keep it fun and interesting. And we sure have both of that here in ArtFx.

BMS: I see that indeed. So, what other stuff do you fellas have in life aside from ArtFx?

Ivo: Recently I joined the thrash metal band Lethal Injury as their new lead vocalist. It’s my first-time performing in a band as a vocalist and I’m really looking forward to perform with them as well. I also enjoy videogames and anime and I love playing boardgames with my wife and band colleague Elke as well as with Tom.
Tom: Some of our favorite boardgames include Terraforming Mars, Mechs VS Minions and Ghost Stories. And my other main activities aside from ArtFx are 3D-printing, walking out with my dog and dogs from the shelter and swimming.
Elke: I work as a nurse and I also volunteer in a parrot shelter. I adopted a few myself. I love watching television series as well as they can also be a big source of inspiration. I don’t find a lot of time for gaming or reading  anymore. Work, my education and the band life takes out a big chunk of my free time right now.
Dempsey: Aside from ArtFx I also play guitar in Guilty As Charged, Black Roses and most recently Behind The Veil. I’m also a videogame lover with the typical habit of buying too many games for which I lack the time to play. Nowadays I prefer my games short and simple. And finally I’m a huge car enthusiast.

BMS: Excellent, Marjolein “Mrs. Metal Shredder” and I are expanding our boardgame library and those are some interesting suggestions. Now, looking at your stage setup I’ve noticed it has quite some colorful lightning.

Ivo: Yeah, a colleague of my work is a light technician and will be responsible for the stage lightning  tonight. He’s good at timing the lightning effects to the beats of our songs and we hope to recruit him as our permanent light technician in the future.
Tom: As I had mentioned earlier, Meshuggah serves as a great creative inspiration for us and we are very fond of their visually impressive live shows.

BMS: I believe a good light show can really help amplify a band’s live performance so I recommend you further build on that as well. So, that’s all I’ve got to ask, you guys have anything else to add to this shredding chat?

Ivo: We would like to thank the city of Torhout for allowing us to play here in the townhall and for the financial support we received from Oaze (https://www.oaze.be/), an organization that offers subsidies and other practical assistance to aspiring young artists from the Ginter region. They gave us the backing we needed to organize this event here.
Elke: We probably wouldn’t be having this gig at this unusual location without their help. All we can say is that Torhout is one culture-loving community.
Dempsey: Thank you for shredding me again (last time was during this Guilty As Charged interview from 2016: https://www.belgianmetalshredder.be/interviews/9).
Tom: Enjoy tonight’s show!