-- A talk with Cristiano Filippini (Metal To Infinity original) --

18/08/2021
Stijn Daneels
Originally published on Metal To Infinity on January 13, 2021. Questionnaire by Officer Nice.
Hello, Here Rico, aka as officer Nice from the Metal To Infinity webzine. How are you guys? First of all a Happy New Year! I have some questions for you, hope you’d like them. 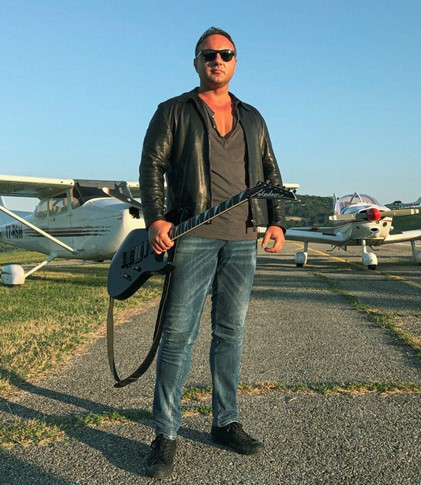 Officer Nice: I suppose for most of the readers this band – or should we call it a project – is unknown. So please, introduce us to the members and the history of the band.

Cristiano F.: Hi Rico, first of all thank you to give me the chance to get this interview. I’d say that Cristiano Filippini’s Flames Of Heaven is not a project but a band, in the modern way…with a main composer and producer but with the other members totally involved in it.
I am a symphonic composer who composed a lot of epic symphonic music for the theaters but with a heavy metal heart. Since I was sixteen years old I have been using composing hard rock and metal music and it was my goal to create a great heavy metal band. Was not easy to find the right bandmates and members. Marco Pastorino (Temperance), the singer, contacted me after my first solo album of symphonic epic music…but I needed a lot of time to find the other members. But once I found Michele Vioni, who was a teacher near my city, one of the best guitar heroes in the world (he is the most viewed guitarist in the world on Youtube), it was easy to contact Giorgio Terenziani (Arthemis), the bassist and Paolo Caridi (Geoff Tate’s Sweet Oblivion, David Ellefson), the drummer because they were bandmates in Killing Touch. I’ve found some of the best player in Italy and Europe for sure.

Officer Nice: It is obvious, while you’re listening to this album, some experienced musicians are at work here. So, what other bands are/were you in and are you guys schooled? If so, please tell us more about it. 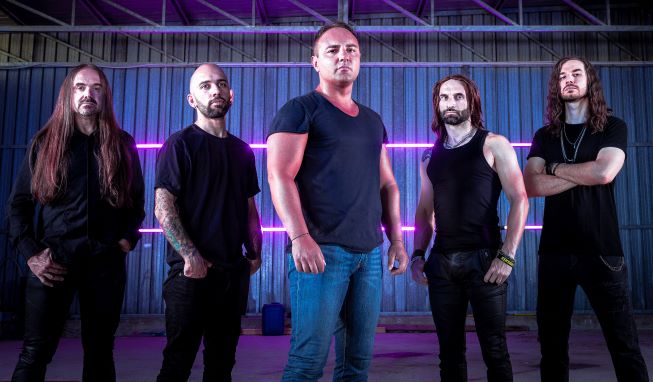 Officer Nice: It is obvious, while you’re listening to this album, some experienced musicians are at work here. So, what other bands are/were you in and are you guys schooled? If so, please tell us more about it.

Cristiano F.: Yes, well this is my first professional heavy metal band. Michele Vioni collaborated also with Blaze Bayley and Edu Falaschi. Marco Pastorino is the main composer and one of the singers of Temperance, and the vocalist also of Virtual Simmetry. Giorgio Terenziani is the bassist of Arthemis and a very known teacher in Italy. Paolo Caridi is one of the best session drummer nowadays in Italy and recorder with a lot of very important names like Geoff Tate’s Sweet Oblivion and David Ellefson from Megadeth.

Officer Nice: What can you tell us, musical wise, about the band?  Please tell our readers what they can expect with this record.

Cristiano F.: My goal was to create a bridge and a mix between power epic metal from the ‘90 and Hard Rock/AOR from the eighties. Using also a real orchestra and real piano for the most epic and romantic moments. I liked also using a lot of synthesizer to create that Synthwave ’80 atmosphear. This is our style. With a modern, clear, powerful but warm production. 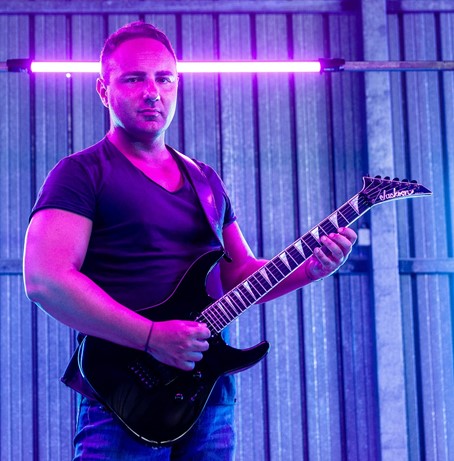 Officer Nice: What were the sources of inspiration, in Metal and eventually besides Metal?

Cristiano F.: My influences? Iron Maiden, Helloween, Stratovarius, Avantasia, Europe, Edguy, Nightwish and Rhapsody (Of Fire) for the European Side. Virgin Steele, Savatage, Survivor for the U.S. Style. Also all the pop and rock music from the eighties and a lot of soundtracks from epic movies.

Officer Nice: What can you tell us about the writing process and the time in studio? All worked out as planned?

Cristiano F.: I composed all the songs and produced everything. Of course I took care of all arrangements, orchestrations etc. About the lyrics Marco helped me with some ideas. I composed also the rhythm guitars and half of a guitar solos. Vioni composed the virtuoso guitar solos and improved mine. I wrote also the guidelines for the drums and bass. After that we started to record….in 5 or six different studios. It took 2 years….we had problems with the previous piano player and artwork (with the previous artists, so we changed one year ago and we ask Stan W. Decker to do the cover and the artworks) wasting a bit of time and money. After that I went to Finland to mix and master with Matias Kupiainen and Mika Jussila. We did three different mixes and mastering and the last one is the version of “The Force Within” that you can listen to. 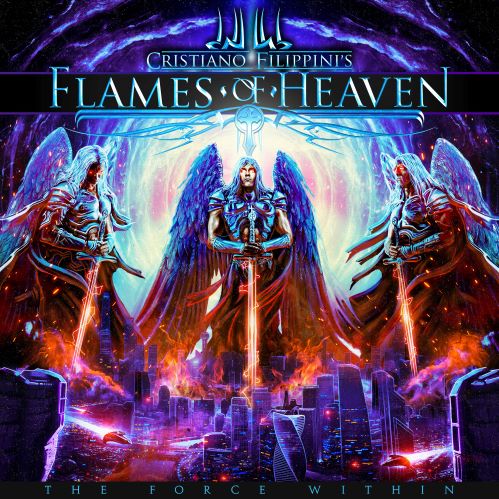 Officer Nice: Did you read my review? Any agrees or disagrees? Feel free to tell your thoughts about it. Are there things I forgot to mention?

Cristiano F.: Of course I read it, as all the reviews regarding that album…It was a very good review and I’d like to thank you for noticed a lot of details. I am very glad that you liked the album. You know…for a rising band…start in a good way with a lot of good reviews is very important…

Officer Nice: Is this some kind of concept album? Can you tell us more about the lyrics? 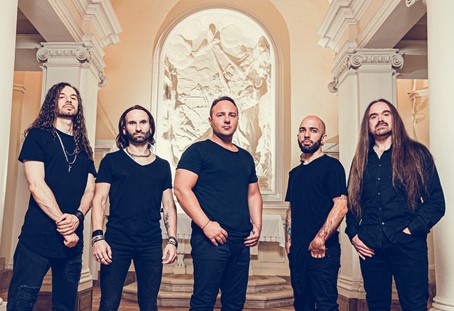 Officer Nice: Satisfied with the way the label supported the band? How did you got in touch with them?

Cristiano F.: Yes I am satisfied, it is not easy nowadays to find a label that believe in you and your music. After the second mix and mastering (not the final one) I decided to send the material to all the labels…not having many direct links I supposed that many of them didn’t listen to the songs ahaha…but you know…is always the same thing. Limb did and he offered me instantly a contract with good terms…so even if I received other offers I choose him.


Officer Nice: We are living in times of COVID-19. What did this do with musicians like you? More time to write music, more time to experience with things? I suppose you have a job, next to music, so please tell us more about it.

Cristiano F.: The Covid 19, musically talking, affected mostly the live music so for the moment talking about CF’s Flames of Heaven nothing bad happened. For the future we will see if we receive offers to play gigs and depends of the interest about the band. It helped me to have much more time and money to improve the album and this is what I’ve done. I will use time for improving a lot of things and to compose the next album. No I don’t have any other jobs….for the moment, for me, is not possible to take care at every details of the band and doing something else. And for the moment I am not interested in anything else.

Officer Nice: Not that COVID -19 allows us to witness concerts but after all, Is this a live band? Can we expect to see you on stage, from the moment we got back to the old times?

Cristiano F.: Of course if we have a good chance we can do concerts…but honestly for the moment is a very vague topic…for every band in the World..i think that maybe at the end of the year we can see concerts more or less like the past… 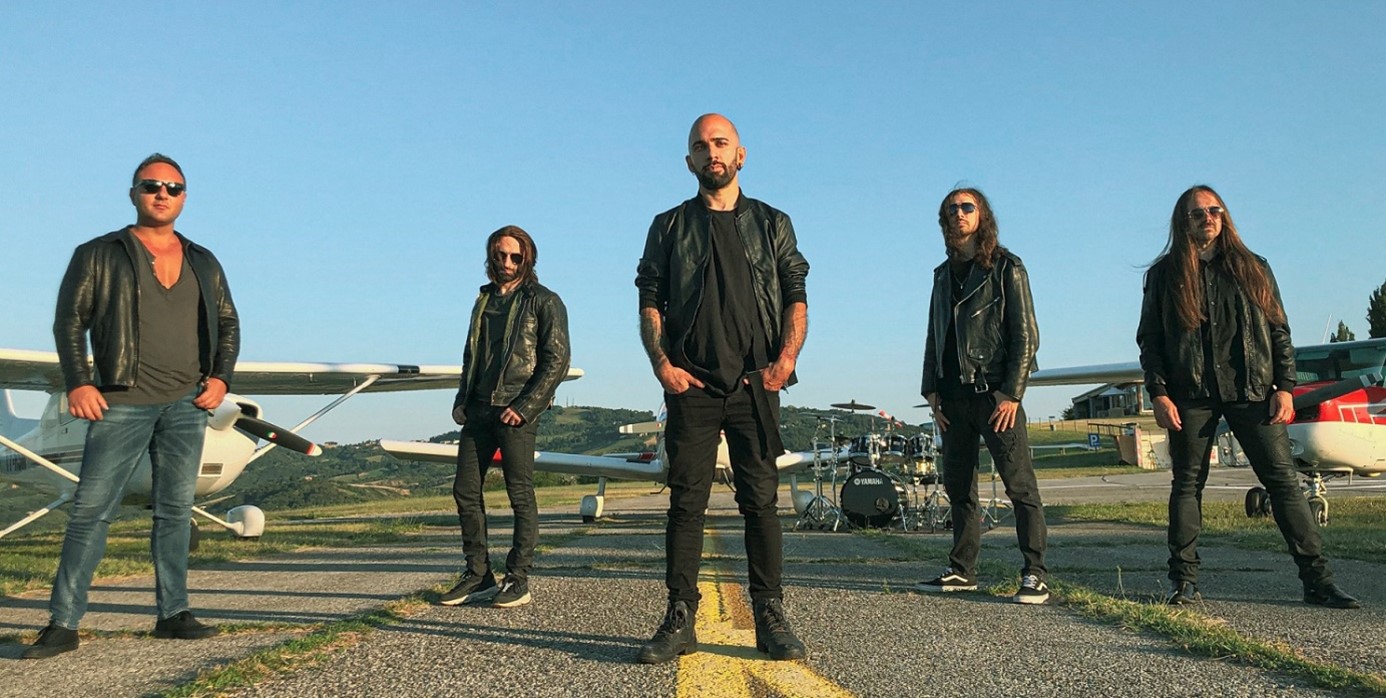 Officer Nice: What can you tell us about the beautiful front cover? Is there a vinyl version available as well?

Cristiano F.: As I told you before we had a lot of problems with the previous famous artist. So I choose Stan W. Decker…a very famous artist who was perfect to realize my concept and idea for the album. He has an epic but modern touch that I liked a lot. The three guardian angels mean the power metal and mystic side of the CF’s FOH…the city under them means the Hard Rock and AOR side, reminding Blade Runner atmosphere etc. The Logo and the name of the band have the same purpose…Flames mean the power epic side and Heaven the Hard Rock and AOR side…and together they are Flames of Heaven…and being Christian Catholic I put the cross in the logo…Sadly there is not a vinyl version and if there are any label interested in it can contact Limb or us directly. It could be amazing, in the future I hope yes.

Officer Nice: 2020 is finally finished. So tell me, what were the best albums (Metal or Non-Metal) you discovered last year?

Cristiano F.: Honestly I didn’t listen to a lot of new music..I usually listen old stuff…I’d say that the last band that impressed me…at least some songs and the style were Beast in Black.


Officer Nice: Is there a website, a place where readers can find out more about the band?

Cristiano F.: Of course…there is my official website www.cristianofilippini.com and www.cristianofilippini.com/flamesofheaven you can go in the shop section and order the album…signed and with dedication…is the only way to get it with these two bonus. If you want the normal cd you can order it everywhere…Limb store, Shops, Amazon, Bandcamp, Ebay…streaming and digital platforms etc… 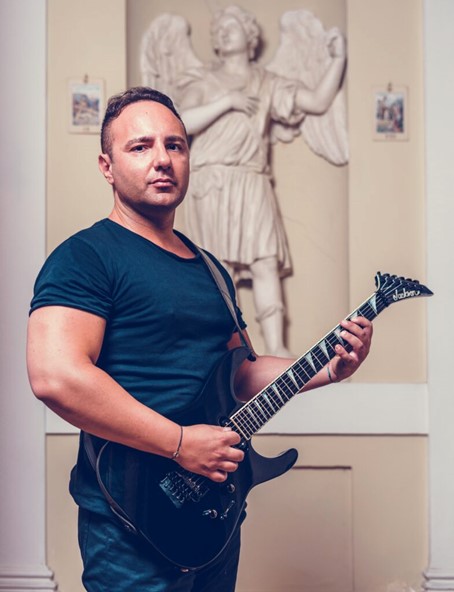 Officer Nice: Any last words for our readers?

Cristiano F.: First of all thank you for the interview and the amazing review. I’d like to invite all the readers and followers to give a chance to our album because it will not disappoint you!!!! Thank you again Rico. Cheers – Cris