-- Worlds Beyond gets shredded! --

In the latter part of 2020, we got in touch with the young, up-and-coming Belgian symphonic metal band Worlds Beyond. They offered us to review their debut album and in return, we decided to Skype shred them! We talked to the band about Worlds Beyond’s formation and the production of their debut album “Symphony Of Dawn” as well as the band members’ various other musical and non-musical activities.

Mr. BMS: Hey everybody! It’s great to have pretty much all of you here tonight. So tell us, how did Worlds Beyond begin?

Tijmen: Hello there Shredders! Since childhood, I’ve been playing classical guitar and 5 years ago I began playing in a music ensemble where we cover both classic and more modern songs. In the summer of 2016, I began writing my own songs. I was mainly inspired by acts like Nightwish and Within Temptation, analyzing their material and giving the genre my own personal spin. Eventually, I had written about 10 demo songs and so the next logical step was to form a band around it. And half a year later Worlds Beyond was formed.

Mr. BMS: I see. So, how did the other members join your Worlds Beyond project?

Tijmen: I knew Ewoud since we were guitar classmates and Robbe was a friend of mine from university, Valerie and Wout both joined in after they replied to an advertisement I had made and finally Jakob is a friend of Ewoud’s and he recommended him to me. Overall, it took about half a year to find all the band members, but after that, we were ready to start the adventure.

Wout: It’s quite amazing to see how people can still find band members via something as simple as an advertisement. I simply saw the ad appear on my newsfeed and I simply replied to it, having no idea whether I would get the job or not. But look, here I am.

Valerie: As for me, it took significantly longer to find a band that suited my musical tastes and ambitions. Eventually, I saw Tijmen’s advertisement on HUMO’s website and took a shot at it. Originally, I was too late to reply since they already had a vocalist. But eventually, Tijmen called me back to audition since their original singer had departed. Before Worlds Beyond, I did vocals for a local band in Ypres called Morrigan’s Cry, that was a good first experience but Worlds Beyond does take things to a whole new level!

Mr. BMS: That’s great! Now that we’re talking about past musical experiences, let’s hear from the other guys. Wout, did you play in any other bands before joining Worlds Beyond?

Wout: My cousin and I have a band of our own called Lucid Dream, in which he plays guitar and I do vocals. Our subgenre is Britpop and at the moment we’ve released 2 albums. Worlds Beyond, however, is a more challenging job in my opinion since I consider symphonic metal to be more of a niche genre compared to Britpop, and playing drums is a craft I haven’t mastered as much compared to singing. Nevertheless, I’m having a blast being part of both bands.

Robbe: Aside from keyboards, I also play saxophone in two different concert bands.

Jakob: The sole musical experience I had was from my violin lessons in the local music school. I’m very thankful for Tijmen offering me the chance to become part of the band since his songs have a lot of violin in the backing tracks. In fact, he had asked me multiple times to join in but I was rather reluctant to join because I considered myself very inexperienced, especially when it comes to metal music. But Tijmen showed me that being part of a metal band can be a lot of fun and I haven’t looked back since.

Mr. BMS: Awesome! I feel that you guys are genuinely passionate about your respective musical crafts and I love it! So, aside from Within Temptation and Nightwish, what other musical inspirations seep into Worlds Beyond’s sound?

Tijmen: I’d say that Scorpions are another main inspiration for the band, in addition to a Japanese act called X Japan, a progressive symphonic metal band that isn’t very well known in the West but who are big in their home country.

Valerie: Although Tijmen is Worlds Beyond’s main songwriter we all contribute, each in our own way, to the material.

Mr. BMS: Interesting, I’m going to check that X Japan band out soon. Now, in preparation for this interview, Marjolein “Mrs. Metal Shredder” and I listened to your “Symphony Of Dawn” album a couple of times. We’ve both got very positive thoughts about the release. Personally, I feel your material is a more guitar-driven version of symphonic metal, it reminds me of our fellow countrymen called Solitude Within. A sweet contrast between the soft-spoken vocals and the heavier guitar riffs. On the other hand, your sound has more folk influences which give your songs a bit more joy.

Mrs. BMS: I feel your material is very relaxing. Very suitable tunes for when you feel sick and need to chill out. Speaking of chilling out, I would certainly recommend your work as music to cool down after a long and intense day at the festivals. Overall, your sound is peaceful and serene but still packs one hell of a punch!

Tijmen: Thanks for the kind words.

Mr. BMS: You’re welcome, so, let’s discuss the production of your debut “Symphony Of Dawn.”

Tijmen: We started recording the album in late 2019 and we recorded most of the material at home except for the drums and vocals. Afterward, I wrote some symphonic backing tracks, and then we got the whole thing mixed by Arjan Bogaert (from Barefootstudio) and mastered by Brett Caldas-Lima (from Tower Studio). The whole process took more time than we had initially anticipated (we had never recorded any material before) but we all ended up being very satisfied with the result. 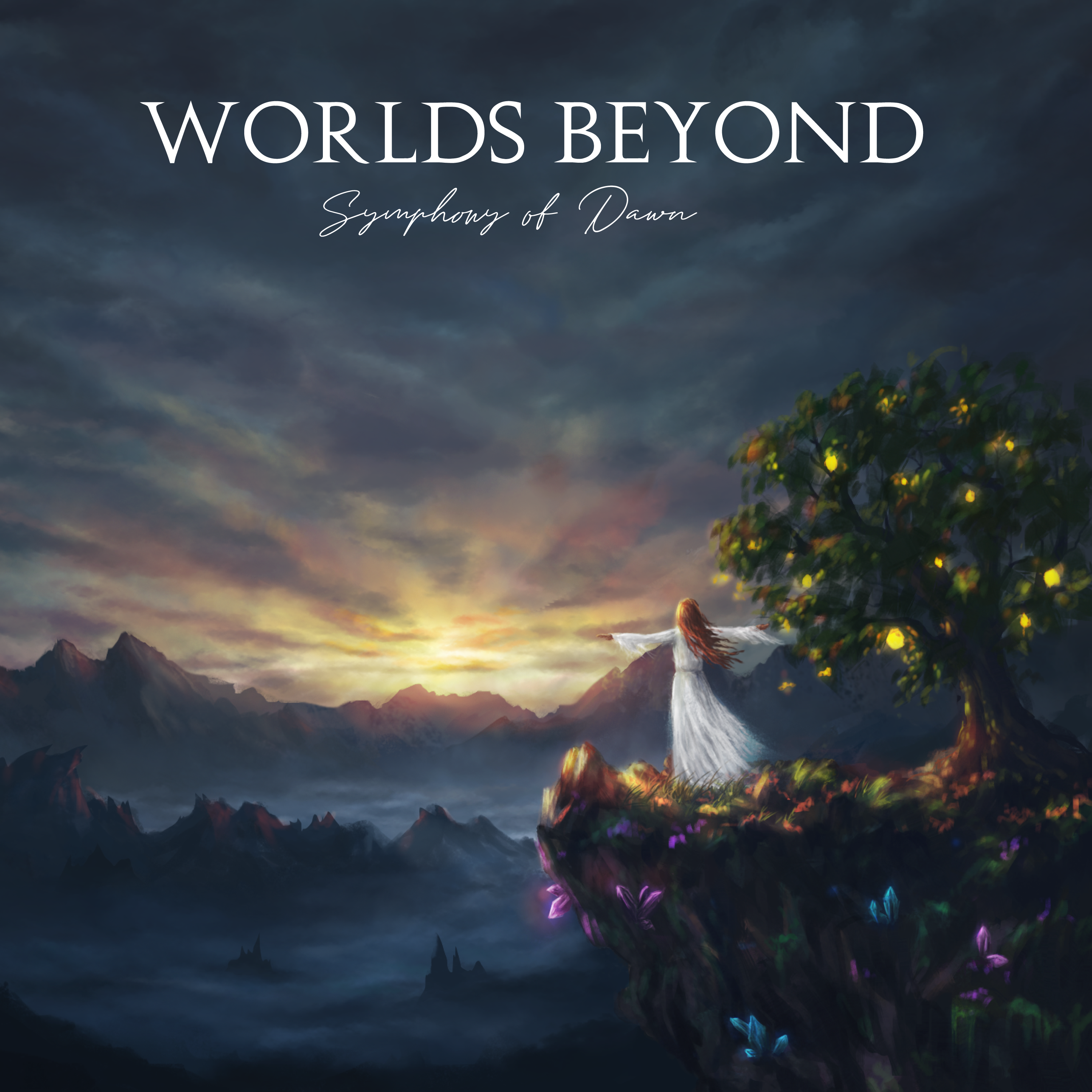 Mr. BMS: Yes, you sure can be proud of your work. You’ve already got some very positive reviews and our review sure wasn’t an exception (read it here: https://www.belgianmetalshredder.be/reviews/266). So, time to hear about your future plans?

Jakob: We had several concerts scheduled for the fall of 2020 but of course COVID-19 put a spanner in those plans. But we are eagerly anticipating the end of this crisis so that we can get on stage and promote our album for real!

Robbe: One very successful gig we already did was the Burgies On Stage event in November 2019 in Ghent. Some of us were part of the Burgies student association and we ended playing in a fully packed venue so that was one hell of a motivational boost!

Valerie: Aside from playing in our home country we also hope to get into the Dutch metal scene since symphonic metal is a very big subgenre there, with bands like Epica, Within Temptation & Delain being obvious examples. We’ve also promised ourselves to play at our absolute best no matter how many or how few people are attending our gig. Every gig counts and counts as an opportunity to increase our fanbase!

Mrs. BMS: That’s the spirit! I’ve always preferred bands that show genuine enthusiasm when they’re performing on stage. It gives off a positive vibe that passes through from the band into the audience.

Wout: Me being a concert organizer I’ve noticed that while the metal scene isn’t the biggest music scene in the world, I do see that metalheads go out looking for a great time and that the bands who play for them are looking for a great time as well. So sure, metalheads may lack the numbers but they sure make up for that in sheer dedication and passion for their music!

Valerie: For metalheads, like us, we don’t just listen to the music, we live through it!

Mrs. BMS: Yes, that’s very true! I recall a gig I attended in early 2020 in Sportpaleis Antwerp with Sabaton & Apocalyptica. One of the most memorable moments was when Apocalyptica were playing their version of Metallica’s “Nothing Else Matters.” First, the crowd got silent and gradually more and more people were singing the song’s lyrics.

Mr. BMS: One of my most memorable gigs ever was seeing Slayer at Graspop Metal Meeting 2016. Moshing from beginning to end as the skies turned into a blood-red sunset.

Wout: One other prominent element in the metal scene is the DIY attitude. Most metal bands start off with basically nothing and had to work their way up playing gigs in bars and other small venues. That way, a band learns to pay their dues and to remain humble and respectful towards their fans since, after all, it’s thanks to them that a band manages to move up in the scene.

Mr. BMS: Indeed. And I also love that metal music can be about pretty much an infinite number of subjects. History, social issues, fantasy, nature, humanism, philosophy, dreams & nightmares and so much more. All right, let’s hear what other activities you fellas do in life aside from Worlds Beyond.

Wout: Music has always been a huge part of my life, with my work with Worlds Beyond, Lucid Dream and organizing events of my own in the Band Cave in Tielt (check it out: https://bandcave.wixsite.com/). Aside from that, I’m also in the process of taking over my father’s company, founding a brewery with six other friends and being part of KSA Tielt as a support leader.

Robbe: I played basketball until recently and as I mentioned earlier I play saxophone in two harmonic orchestras. I’m also a sports and IT manager for my local student association.

Jakob: I’m passionate about science and electronics and I study the latter at Ghent University.

Tijmen: A few years ago I discovered a video course about making epic movie trailer music and I found that so interesting that I decided to make my own soundtracks. I’m planning to eventually write music for movies orgames. Aside from that, I’m in my final year of computer sciences.

Valerie: I’m a kindergarten teacher and I’m also a member of my school’s management. I also still attend singing lessons and I like knitting and wood crafting as well.

Mrs. BMS: That’s very interesting. I like knitting too. So, tell us, what are your personal favorite songs on the “Symphony of Dawn” album?

Valerie: I’ve always felt a personal connection with the song “Ice King.” I love the harmony between the guitar and violin as well as the intimate atmosphere that the song invokes.

Wout: I remain very self-critical about the material and therefore it’s quite difficult to choose a particular Worlds Beyond tune as my favorite. But for now, I take “Edge Of Faith” and “Winterstorm” as well as “One.”

Tijmen: I also choose “One” as my favorite tune for the moment. Despite my maybe slightly rugged looks I do also enjoy metal’s more softer and sentimental side and that’s what I want to bring with Worlds Beyond. A fine balance between heaviness and softness.

Mr. BMS: So, we’re almost done here. What else do you wish to tell us before we wrap this up?

Tijmen: I highly recommend everyone to check out all three of our current music videos, “Edge Of Faith,” “Moonlight” and “Winterstorm.” All three music videos have a distinct musical and visual style and show the various sides of Worlds Beyond’s sound.

Mrs. BMS: We’ll certainly check them out. Thank you for your time with us!