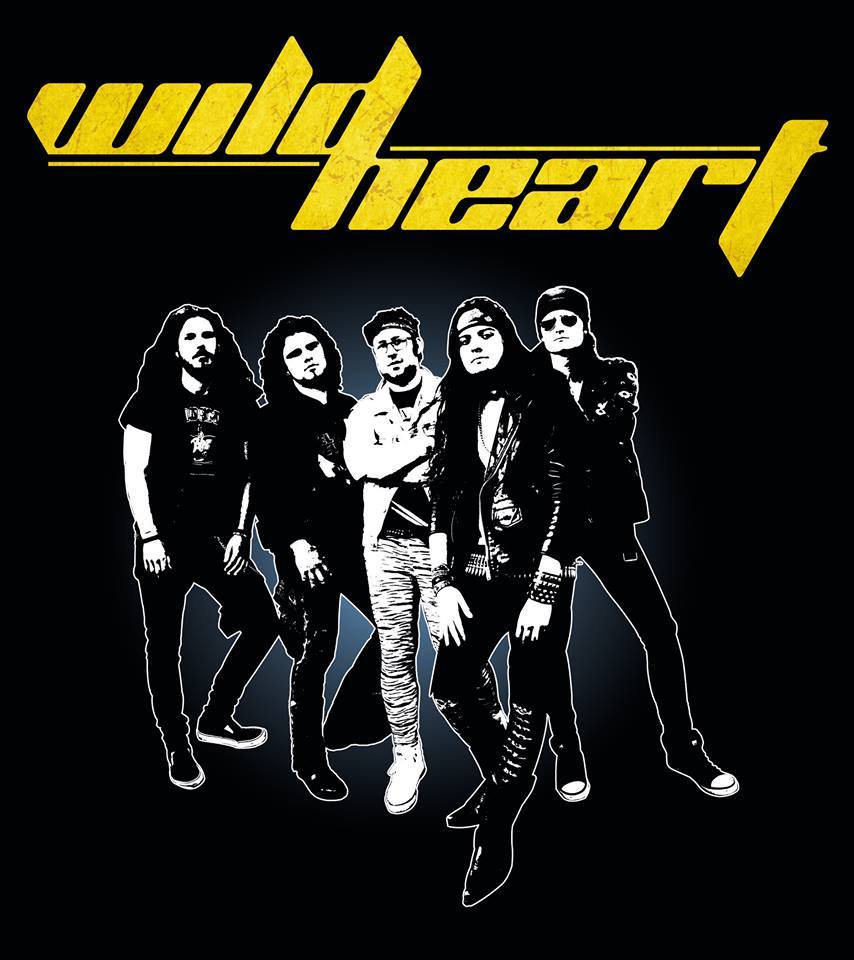 I’ve already discussed how I encountered WildHeart in my review of the band's self-titled album. But not only did they get themselves an album, but they also organized their very own festival, conveniently called WildFest. A festival that had an impressive roster of bands like Crazy Lixx, the Treatment, the New Generation Superstars and of course WildHeart themselves.

And since the festival took place about 10 kilometers from my home, I had to be there and talk with the guys from WildHeart. Although they were also working hard behind the scenes, taking care of drinks, providing entrance bracelets and helping the bands set-up their gear, one of them had time to talk to me. And it was no other than Juice.

BMS: Let me start off by congratulating you guys on your first festival! Since WildHeart was founded in 2014, it must have been two awesome years for you and the gang!

Juice: Thanks! You’re right, we started out in early 2014, but 2015 was one hell of a ride! We did more than thirty shows with our gig at the Blast From The Past festival been the absolute icing on the cake!

Juice: We never expected to get this much love. After all, for some of us, WildHeart started out as more of a fun side-dish to let the beast out on a different roll. But people seem to gain an appetite for this more relaxing kind of metal music and since glam metal bands aren’t very common nowadays, I guess that’s why we get that many shows.

BMS: I’m not a big glam fan, but in early 2015 I discovered your band and felt a lot of potential. I saw you during Metaaldetector 2015 which took place in this same venue and I’ve got to say your band improved significantly in the course of a year.

Juice: WildHeart’s sound is more or less a melting pot of various metal subgenres, with some members still being active in other bands (IC/TC, Warckon). We also don’t aim to be some Bon Jovi pop rock band. I’d say WildHeart’s musical philosophy has more in common with Whitesnake’s, if you know what I mean.

BMS: Speaking of musical influences, do you guys easily get along when it comes to writing new material?

Juice: Well, when writing music for WildHeart, certain habits had to be altered. I used to write songs at home until they were finished. After that I’d bring the songs to the band to learn them. With WildHeart, it’s more of a mutual effort. We write our material during rehearsals. One of us comes up with an idea and the other guys give their feedback. Then we start jamming together and the ideas naturally evolve from there. Once we’ve got the basic elements of a song together (riffs, hooks, choruses, etc.), we formulate the structure and fine-tune the song from there. It’s spontaneous teamwork!

Juice: It doesn’t take much time to get a song fully finished either. Usually one or two rehearsal sessions. Mainly because we provide our input more or less simultaneously and since we don’t pound our heads at our songs for very long (because if you have to manipulate an idea too much, it’s probably not going anywhere after all).

BMS: Now, how did you get your nicknames?

Foxx got his nickname through another nickname he has. Don’t ask. Although he also has been known to go by the name ‘Jack Sparrow’ when he has a moustache.

Juice: I got my nickname  through my favorite Steve Vai song. Stevie Dee’s name is based off his real name, as is Thunderberck’s. Fun fact, I only got to know Farty’s real name after we’d been playing together for six months! But I don’t know where he got that nickname.

BMS: I’ve got my own nickname because it sounded much cooler than Belgian Metal Guy, which was my first idea for the name of my webzine. BMS: Tell me how the first WildHeart album came to be.

Juice: In 2015 we played in Roeselare where we met Jan De Greve. We talked to each other and we came up with the idea to organize a sort of festival. At the time we didn’t think it would end up being what it is right now. At the time, it wasn’t related to an album release. The songs for our debut album were ready for recording in December 2015 and so we took a risk and decided to both host a festival, which would take place in May, and get an album ready to be released at the same day. I can tell you, these last six months were heavy as hell. We only received the physical version of our album a mere two days ago!

Juice: We want to give a massive shoutout to our sound engineer, Johan Ancaer from Tullamore Studios, who gave us incredible support during that time period as well as all those people who helped us during the production process of the album. We were very fortunate to work with such reliable and dedicated people. Without them, we wouldn’t have been able to finish the album in time for today and we wouldn’t have had this festival either!

BMS: I’m impressed with your work. I didn’t thought you had so little time to prepare the album.

Juice: As I said before, we’ve already had our songs fully written by December 2015 and by then we knew exactly which tracks we wanted on the disc. In addition, we had been working closely together for almost two years by the time we began recording so we knew how to get the best out of each other. The time constraints were of a practical nature: getting the album recorded, mixed, mastered, printed etc. and getting the festival off the ground. All in addition to our daily jobs. We all worked our asses off, but we had a great time while doing so!

BMS: Now that you’ve successfully put together your first album and your first festival, what’s the next big ambition for WildHeart?

Juice: The sky is the limit!

Juice: Ok, things have been going hard and well, so we hope to keep up this pace, work on new material and maybe a second edition of WildFest. But we also remain down-to-earth, we consider ourselves extremely lucky to have already reached this point and we don’t put any big goals or ambitions with WildHeart because it may only end up in disappointment. No, we want to remain focused on writing stuff we’re satisfied with and that we enjoy playing live. Your audience notices immediately whether you’re playing because you have to or because you want to. We like to keep our expectation modest so we can be surprised by how things eventually evolve. BMS: What do you guys do aside from WildHeart?

Juice: We all have our nine-to-five jobs. Education, IT, social work, accounting, etc. And other than that, WildHeart is our mutual five-to-nine job. There isn’t much else to it.

BMS: I do think there is. You guys dig 80s pop culture, like me, right?

Juice: Thunderbeck is a huge retro gaming fan! He collects games from the NES and Super NES. We also love 80s action and sci-fi cinema like the Terminator, Robocop, Rambo, Ghostbusters, Predator, Aliens, Commando, the Running Man… aaaaaaaah! Now that hit the spot!

Juice: But let’s not forget Star Wars! I loved The Force Awakens.

BMS: I recently bought the film on Blu-Ray and you’re right, it was an excellent movie. It paid homage to the original trilogy and it introduced new, well-written characters as well. I’ll never forget the first time I saw the Millennium Falcon appear in the movie.

BMS: Now it’s time to let your fantasy go wild? What big rock bands you would love to share the stage with?

BMS: I know! But just tell me what comes to your mind.

Juice: Obviously the bands that inspired WildHeart. Hard rock legends like Aerosmith, Led Zeppelin, Mötley Crüe, Whitesnake, Deep Purple although most of those bands aren’t performing anymore. Still, we already had great experiences with the bands we’ve worked together since our inspection.

BMS: Now for something funny. I noticed that only three WildHeart members were wearing an official WildHeart t-shirt. Was yours stuck in the washing machine?

Juice: As a matter of fact, it is. So that’s why I put on this cartoon-like Rambo shirt when we played. I’m now wearing a freshly printed t-shirt from Nico De Vreeze’s web community called Hell Spawn. The only problem is that I’m not allowed to wash it for five straight days! I’m curious how that’ll turn out.

BMS: I also know Nico, great guy! Like you, he’s very supportive of my webzine and he’s already personally introduced me to a couple of bands in the past such as Patriarch.

Juice: Up till now things have gone very smoothly. Since we’re in a band ourselves, we know a thing or two about what logistic preparations bands like to see when they have to play somewhere. We also try to look at things from an attendee’s point of view. So we arranged for a well-indicated, sufficiently spacious parking area, we reserved a spot for wheelchair users at the front of the stage so that they also could enjoy the show with ease. Access to food and drinks was also important, since we all know how much energy one consumes with all that headbanging, moshing and stuff. And room for the merch booths, everything an average headbanging Joe needs.

BMS: I can already tell you that, as an attendant, I’m having a great time here. You’ve brought up an impressive, varied roster of bands. You guys know your craft and I really hope you’ll be organizing a second edition next year!

BMS: Is there anything else you want to say before I go back to the front of the stage?

Juice: Sleep when you’re dead and let your wild heart out!