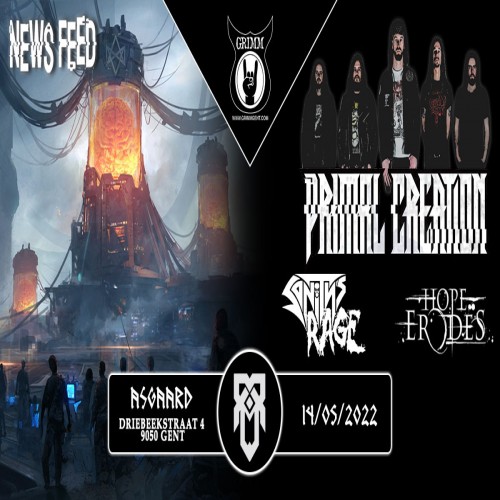 Review written by Stijn “Metal Shredder” Daneels with assistance from Marjolein “Mrs. Metal Shredder” Deduytschaever. Pictures by Stijn “Metal Shredder” Daneels.
About a year ago the up and coming Belgian progressive thrash metal band released their well-received second album “News Feed” and we also had a lot of positive to say about it (read our review: https://www.belgianmetalshredder.be/reviews/289). The band had a release party scheduled in Asgaard Gentbrugge but because of the then ongoing COVID19 measures the whole show was postponed so much later after the album’s initial release that said release party became a 1-year anniversary release show. Nevertheless, Primal Creation was pumped to finally bring their “News Feed” album live to the Asgaard Gentbrugge masses, with support from 2 other excellent Belgian metal acts.

Hope Erodes is a band that I’ve been following for many years now, with their 2019 EP “Rainwalker” being a nice little gem to shred through (read our review: https://www.belgianmetalshredder.be/reviews/141). Unfortunately, the band suffered from several lineup changes through the years with their most recent change being a new vocalist in the form of Koen Van Der Aa. And since it’s been such a long time since I saw Hope Erodes live I was quite curious to see how they would look, sound and feel today. And I’m glad to say that they sounded just as sweet as I had remembered them. A rough but melodic metalcore sound that’s quite catchy overall (especially my personal favorite track of them: “Consumer Of Death”). Nothing that groundbreaking here, but what made their live performance at Asgaard Gentbrugge really memorable was the sheer energy of frontman Koen. He frequently jumped off the stage to grunt and scream straight into the faces of the crowd. The rest of the band also shared that live on stage enthusiasm and headbanged a hell of a lot. It all helped in making Hope Erodes are more than solid opening act for the two other acts that were coming up.
For me, Hope Erodes is a kind of band that perfectly fits in such a cosy venue like Asgaard Gentbrugge. Their style of music is straightforward and grabs your attention. And of course, it allows them to spread their masculine vibes up close and personal with the audience. Now let's hope the band is now up and running again for real and that they'll waste no time making a successor to that short but enjoyable "Rainwalker" EP.

Next up that evening was the thrash metal act Sanity’s Rage. A band whose name I had occasionally encountered over the years but to who I hadn’t yet given much attention to although I did take the opportunity to showcase them as Belgian metal band of the day just 24 hours before this event took place. Since then, I’ve done a bit of research about this band and I noticed that they had achieved quite a cult following during their active years (from 2002 till 2016) and that now, after a six-year hiatus, the original members of Sanity’s Rage have reunited.
And not only did the original lineup get back together, they also treated the crowd (die hard Sanity's Rage fans and newcomers alike) to thrash metal that, while having all the typical ingredients (such as snarly vocals, fast and rhythmic beats and hectic guitar solos) dares to go for a more intimate and emotional route as well (a great example of that unusual thrash style is the beautiful ending song "the Crumbling Halls Of Sanity"). It kept their show very engaging and, for someone like me who didn't know much about Sanity's Rage, quite unpredictable. One thing I did notice in the beginning, however, was that the band looked a bit stiff and nervous on stage but fortunately, they gradually opened up to the crowd and then you could clearly see that Sanity's Rage was back in full force. Playing tunes from their classic 2006 EP "The Rage Of One" and so unleashing a nostalgic tour de force for their fanbase and a very pleasant first encounter for yours truly.
Their performance at Asgaard Gentbrugge showed a revitalized Sanity’s Rage that not only smoothly brought back the beloved tunes from their heyday but also showed new material inspired by said beloved tunes. For me, Sanity's Rage shows me that thrash metal can be more melodically and atmospherically diverse than I sometimes give it credit for.

After 2 excellent support acts it was finally time for the young wolves of Primal Creation to present their “new” album “News Feed” to Asgaard Gentbrugge. As for me, I've been following Primal Creation since their 2017 debut album "Demockracy" and I saw them win the 2019 Wacken Metal Battle Belgium (not an easy win, since the band competed alongside the likes of Cathubodua, Hunter, The Curse Of Millhaven and other great Belgian metal acts). Their second album, the aforementioned "News Feed" was a true pleasure to shred as well (as mentioned in the beginning of this article).
And now Primal Creation took the crowded Asgaard Gentbrugge venue by storm, dispersing their throat-grabbing and attention-commanding progressive thrash metal to the masses. What I like the most about Primal Creation is how versatile their style is. It has prog complexities, thrash pacing, a variety of vocal styles (going from clean and punk to grunting and screaming) and more, all tightly knitted together and topped off with lots of furious energy for a headbanging and mosh pit causing cocktail. And it showed during their gig at Asgaard Gentbrugge! The crowd moshed like crazy on songs "A Post-Truth Order," "Lie/Share/Subscribe" and "Vial Play," joining the band in ventilating their frustrations at this cruel and unjust world we're living in. Too bad the Primal Creation show ended after just 1 hour. We and the rest of the audience were certainly ready for even more tunes.
With another successful gig under their belt Primal Creation is slowly but surely becoming a definitive Belgian thrash metal draw and it's not hard to see, hear and feel why. Their shows are energetic and engaging, their sound is easy to get into yet deep enough to feel method in their madness and their themes are topics that every young working class guy/gal can relate to. So Primal Creation, I say to you, as was the title of your encore song that evening, "retain the fight!"

{A release party 1 year in the making in a packed and pleasant location and for only 5 euro entrance fee (which is a steal given the amount of talent on display). Primal Creation, Sanity’s Rage and Hope Erodes was a thrash triple treat for all headbangers to enjoy.
}