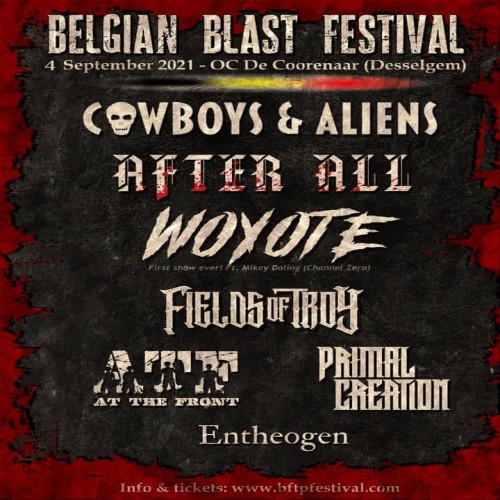 Review written by Stijn “Metal Shredder” Daneels. Picture compilations by Bianca Lootens.
On September 4th 2021 we went to the inaugural edition of the Belgian Blast Festival. Organized by the lovely folk behind the nostalgia-themed Blast From The Past events. This was the 2nd of 3 major events we attended in September (the others being Darken The Moon XII & Devils Rock For An Angel) and it also were the first post-pandemic events that we could go to without facemask or social distancing. Just like old times!

Belgian Blast 2021 began with the young progressive metal band Entheogen. A year ago the band released their debut EP “Other World” which was also sent to us by Hard Life Promotion. 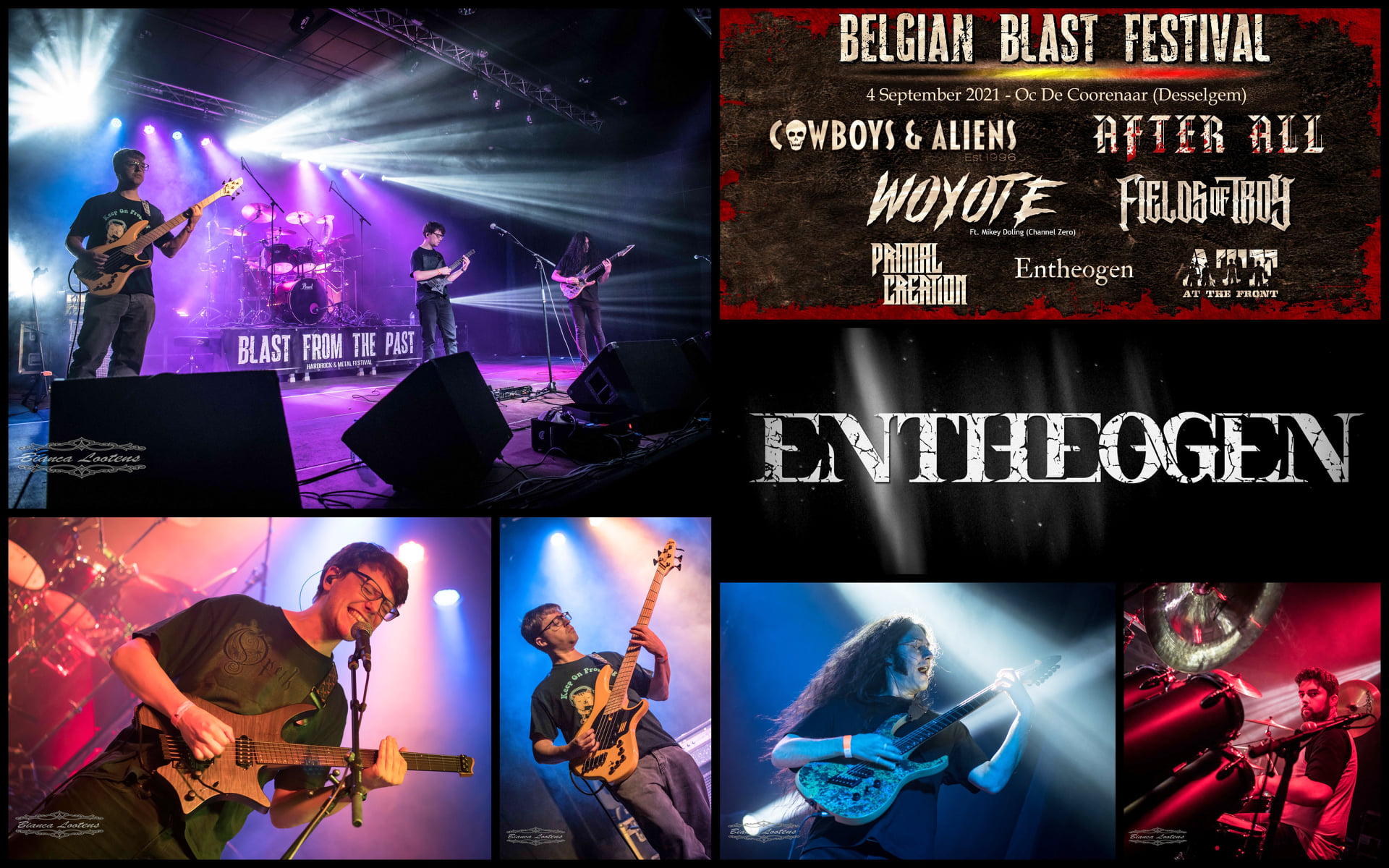 While Entheogen’s sound is prog metal at its core, the band did employ several tricks to give a short but good first impression to us. The band frequently went back-and-forth between long, relaxing parts with gentle guitars and death metal inspired sections filled with galloping drums and aggressive riffs. These musical changes happened at sudden moments throughout their songs with gave Entheogen’s music some good diversity. The rare vocals on their material were also extreme metal inspired (particularly black metal) but I think some additional cleans may make their sound even more versatile. In addition, I also think that the band members, although showing genuine skill in their respective crafts, could still play more alongside each other, maybe doing some back-to-back stuff in which both guitarists take turns in making one epic, long guitar solo.
While the overall performance felt a bit longer than it actually was, Entheogen did serve as a solid and colorful opening act for Belgian Blast 2021. If you enjoy acts like Opeth or 90s Death then this is one up-and-coming band to check out.

The groove metal veterans called At The Front is a band that I’ve been following for about 5 years now, their 2018 EP “Faith” was enjoyably groovy (read our review here: https://www.belgianmetalshredder.be/reviews/116) and I’ve seen the band live a couple of times since then. 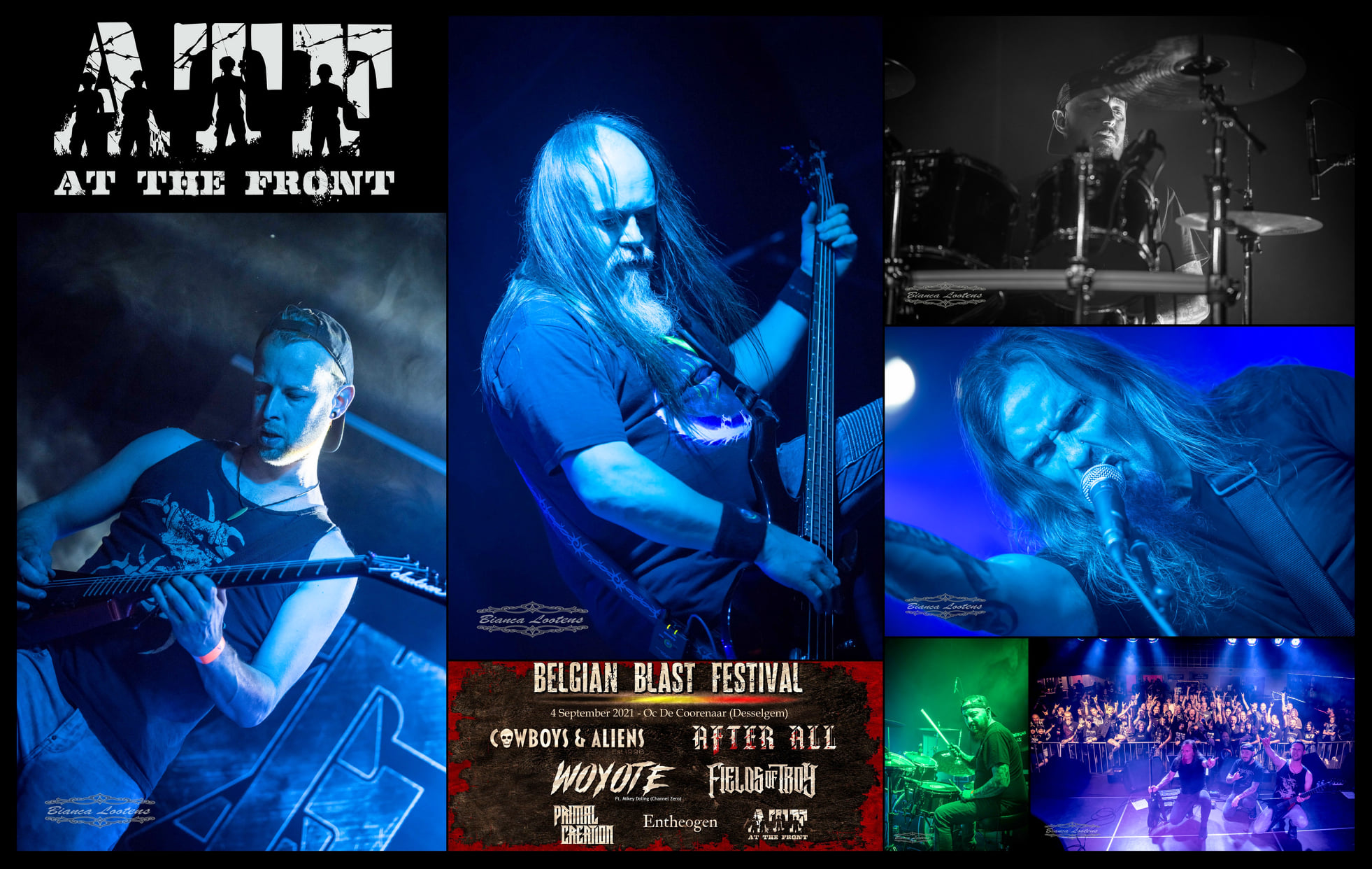 At Belgian Blast 2021 these old-fashioned groovers returns to the stage and delivered exactly what you can except from a band that takes their cues from acts like classic Sepultura and Pantera. Rough and ready tunes made by sharp bass, distorted guitars and raspy vocals. At The Front’s songs were also surprisingly catchy, particularly tunes like “Love” and “Faith.” The band and crowd shared a ton of mutual enthusiasm and it made the band headbang like crazy. The only thing I didn’t like about At The Front’s show was that they played a couple of covers (Sepultura & Korn to be exact). Now, those covers were nicely played but I’ve always preferred bands to fill their shows with as much original material as possible. And me knowing the band, At The Front has enough good stuff of their own to fill in a 30-minute slot.
Not much else to say about At The Front except that they provide an excellent throwback to the groove metal that dominated the final decade of the 20th century. Nothing more, but certainly nothing less. 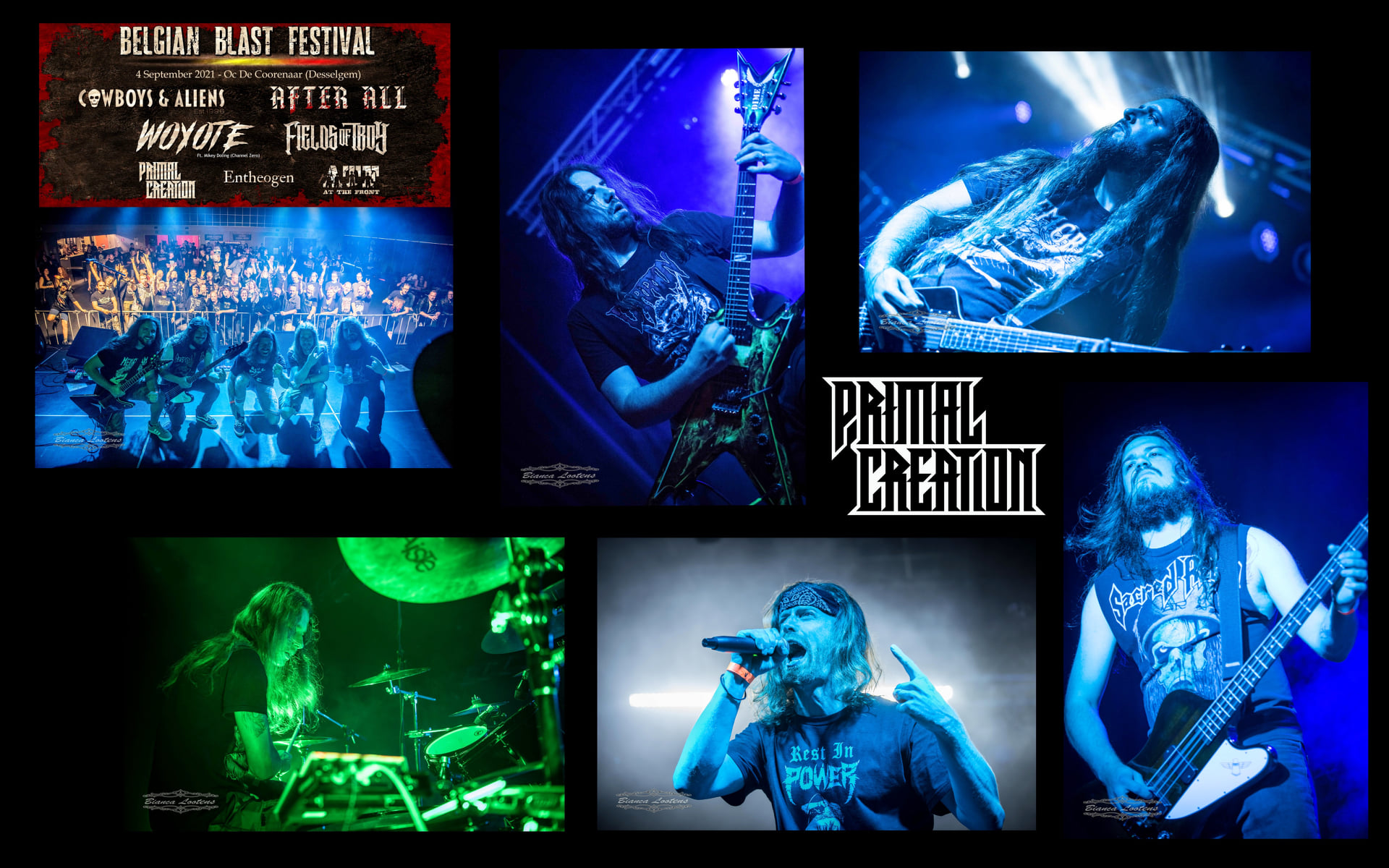 Primal Creation have made quite their mark on the Belgian and international metal scene in recent years with their biggest achievement being the victors of the Wacken Metal Battle Belgium in 2019 and their new album called “News Feed” was a joy to shred through (read our review here: https://www.belgianmetalshredder.be/reviews/289).
If I’ve got to describe Primal Creation’s style in one word, it’s anarchy. The band basically consisted of 5 working-class men who, fed up with the injustice in our society, decided to let their voices be heard with a flexible sound that blended the fury of thrash metal, the technique of death metal and the complexity of progressive metal. Not only in terms of riffs and beats but also when it came to vocals Primal Creation put in a lot of variety with cleans, shouts, grunts, shrieks and everything in between. I also loved the attire of frontman Koen, his hairy face and worn out jeans made him look like a hobo who was now moving out of the city slums to voice his anger to the world.
Primal Creation’s meticulous mix of thrash, death and prog metal along with their usual energetic stage presence made them one of my personal favorites on Belgian Blast 2021’s lineup. I’ll definitely continue to follow these anarchists towards their next riots. 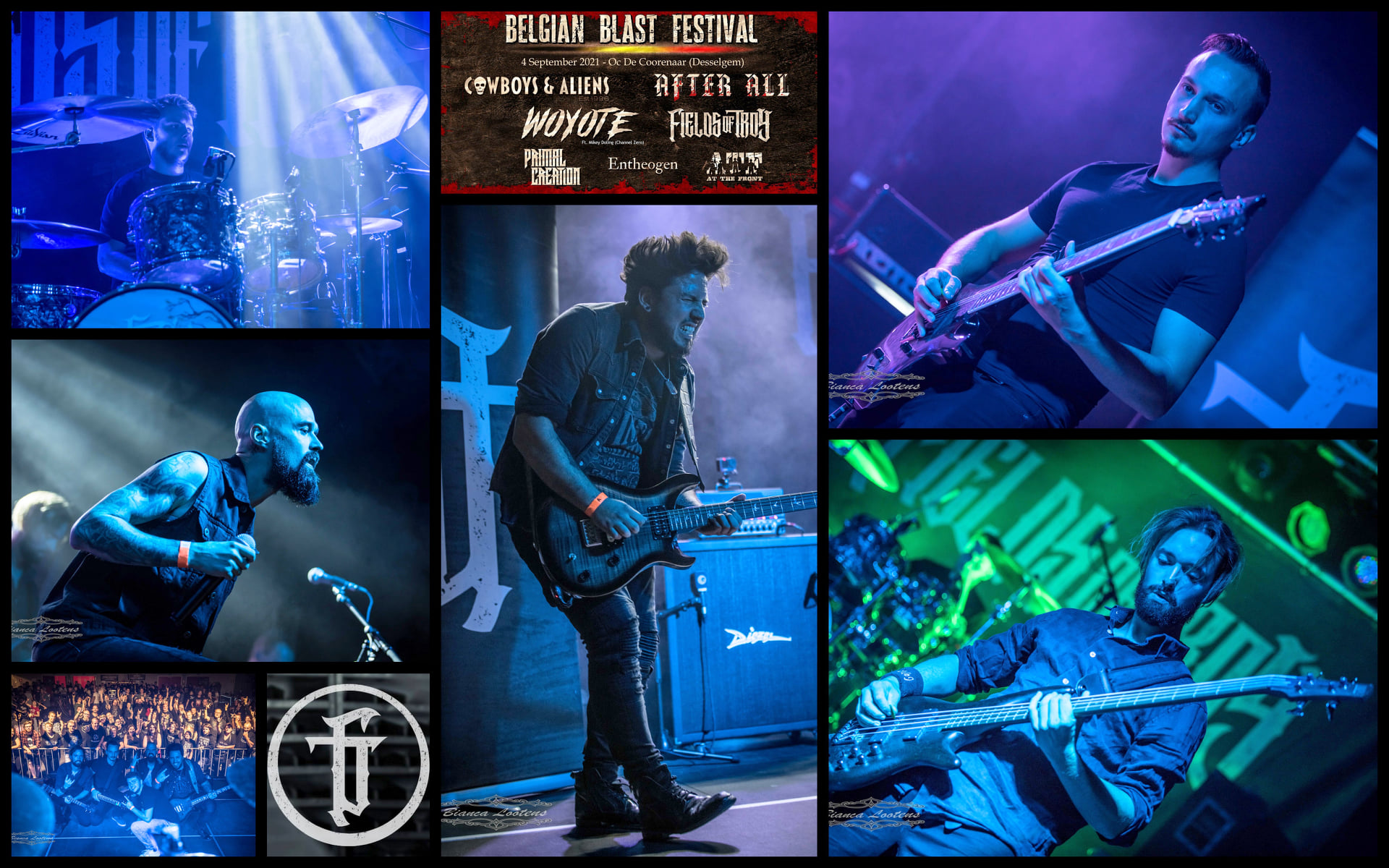 Next up on Belgian Blast 2021 was Fields Of Troy, another band that I’ve been following for several years and that released an album that I had a ton of fun shredding through. That one was 2018’s “The Great Perseverance” (read our review here: https://www.belgianmetalshredder.be/reviews/83). That being said, however, it had been a very long time since I had last seen Fields Of Troy live so it was great to see them again.
Fields Of Troy’s sound was quite modern in my opinion, reminding me of acts like Disturbed and Alter Bridge, so it was a very straightforward style but the band did deliver it all with plenty of energy and melody. Frontman Louis in particular didn’t stand still for a single second and his vocals were surprisingly operatic for this kind of alternative metal.
There isn’t much else I can say about Fields Of Troy’s performance at Belgian Blast 2021. The band’s style may not be the most original around, but the legit passion the band showed during their gig was enough to sell it to me. I do hope to one day attend their self-organized festival called Troyfest, I think seeing them perform at their home turf will be even more exciting. 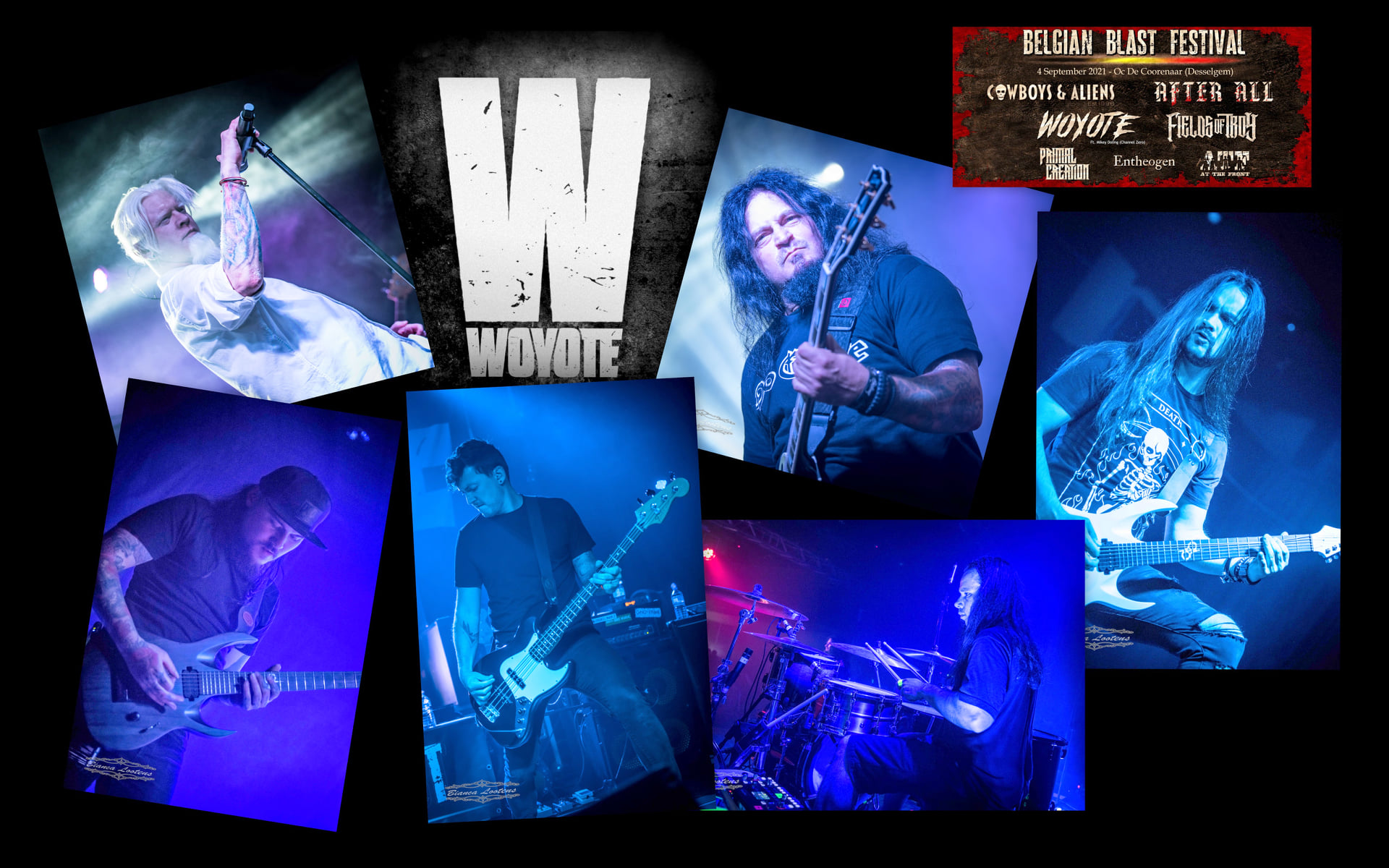 While Woyote may seem like a beginning metal band on paper (after all, the band was formed just over a year ago), the band’s lineup tells a whole different story. Founded by Channel Zero’s longtime serving guitarist Mickey Doling who recruited other experienced musicians who had already earned their salt in acts like Hell City, Firedown & So We Collide, this newly formed Woyote instantly had a ton going for it.
And I must say that Woyote delivered on their promise of bringing pure, honest and organic rock & roll to the masses. Their songs oozed with genuine hard rocking charm thanks to the powerful riffs, heavy bass lines, pounding drums and not to mention the convincing vocals of frontman Mr. White, who, true to his name, was entirely dressed in white to along with his platinum-colored hair. It made him stand out among his black-clothed band colleagues and it also made the band as a whole visually distinct.
Woyote’s show at Belgian Blast 2021 was certainly one of my favorites. They’ve got another gig coming up here in Belgium this year (this time at the Waregemse Metal Days) and I’m really looking forward to that! 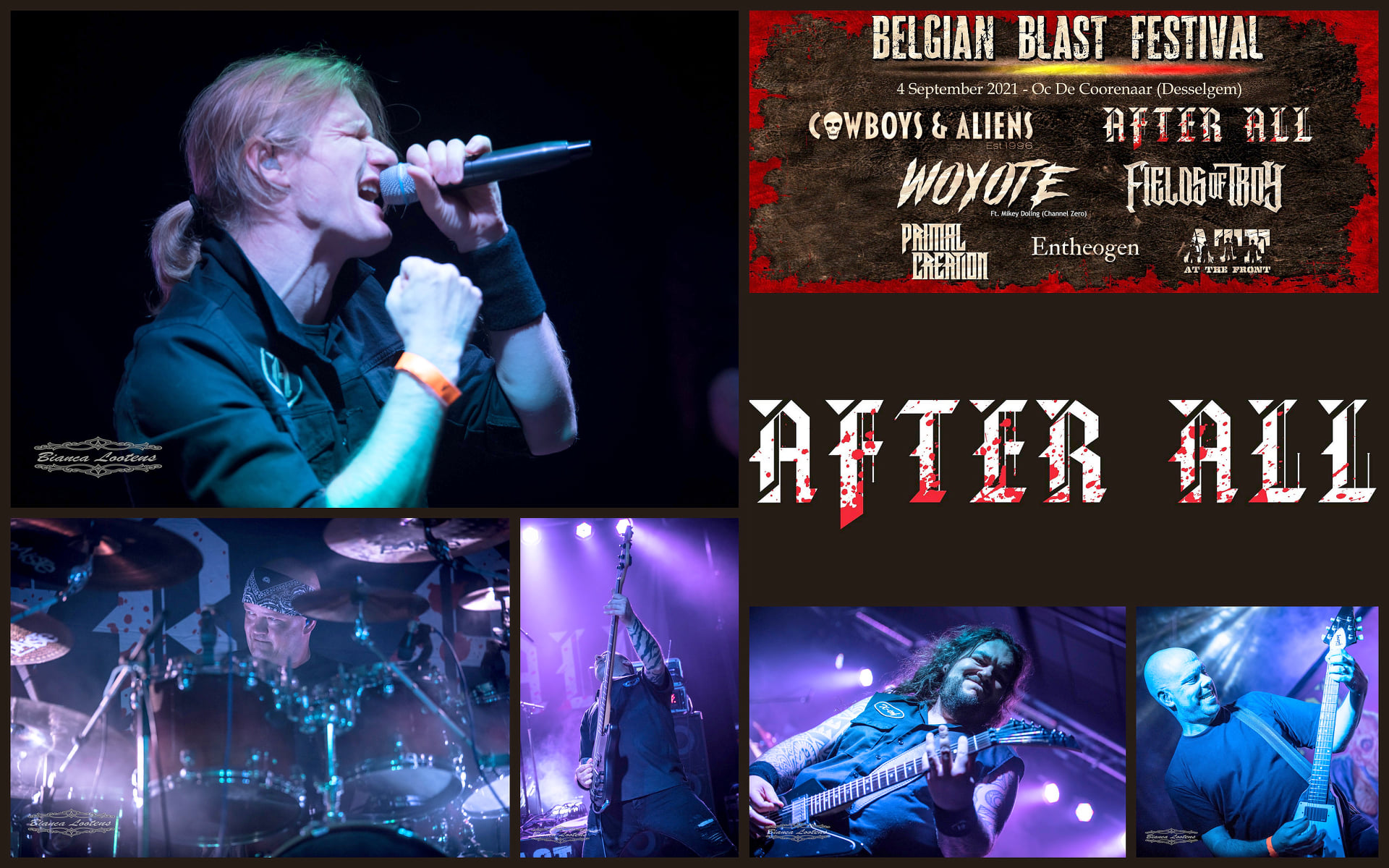 The penultimate band on Belgian Blast 2021 were the old-school thrashers called After All. Another band that I hadn’t seen live in years but it was great to see them again.
The main ingredient of After All’s sound was thrash metal, but what made them stand out were the high-octane vocals and the huge technicality of the guitar riffs. In terms of songs the band played material from their large repertoire including fan-favorites like “My Own Sacrifice” and “Rejection Overruled” but they also premiered a new song called “Judas Kiss” so it was fun to see the band is still making new material despite being active for over 30 years now. Other than that, After All did pretty much everything you can expect from a top tier thrash band.
After having seen their long and energetic show at Belgian Blast 2021 I’m curious to hear what After All is going for next. It’s already over 4 years since the band recorded any new material and it would be great to see them expand their thrash A-game at least one more time! Judas Kiss and all! 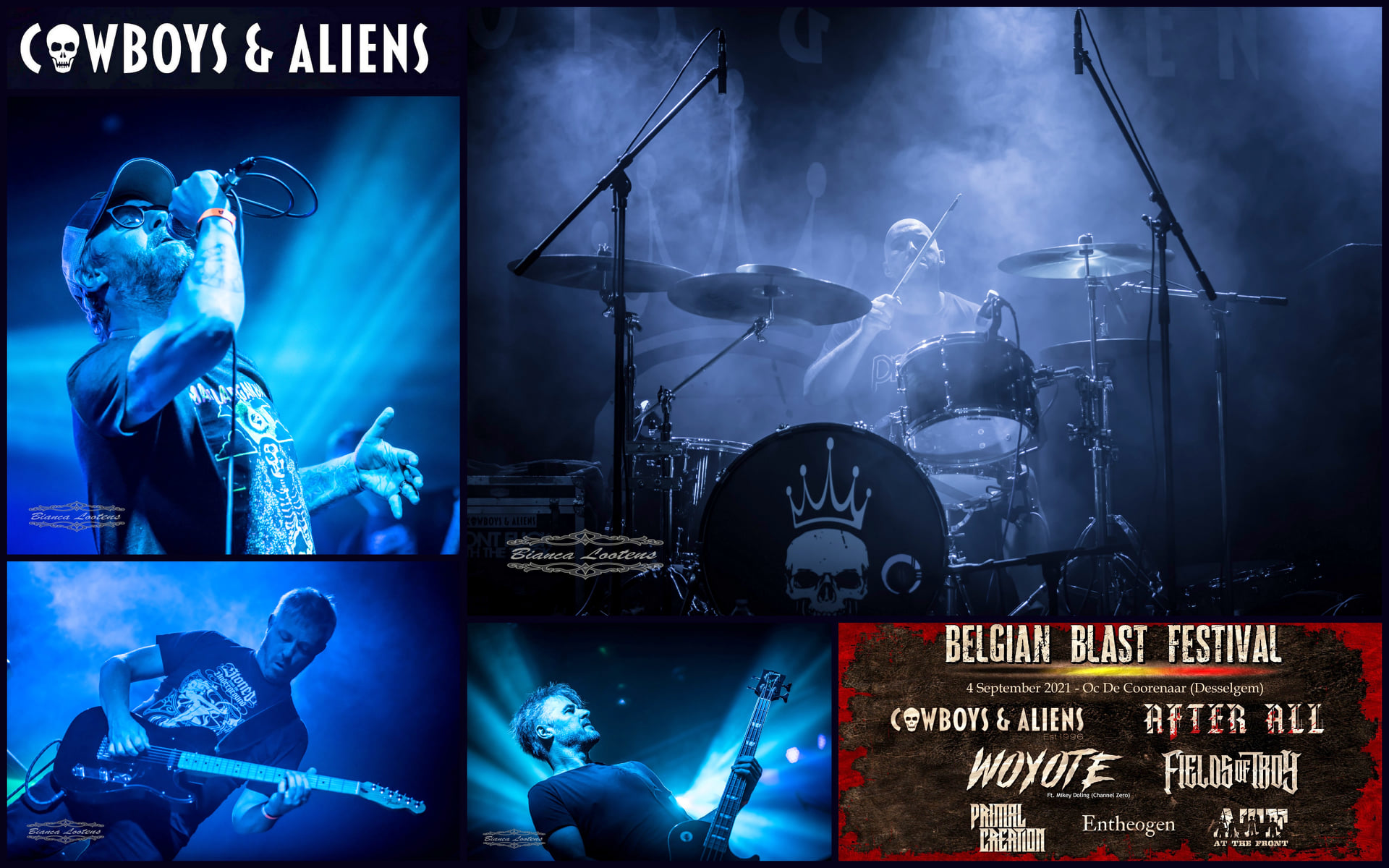 Belgian Blast 2021 ended with the Belgian stoner rock pioneers called Cowboys & Aliens. I can’t really remember having seen the band live before but in any case, it was a pleasant encounter.
Cowboys & Aliens played classic stoner rock and despite the band members’ advancing years they played like they had all just drunk from the fountain of youth, especially frontman Henk energized the crowd with his seemingly unlimited vigor and that was certainly helpful since it was already near midnight when they took the stage. The band presented a varied set of songs from their lengthy repertoire including several tunes from their most recent album, the 2019 release “Horses Of Rebellion.” The band clearly enjoyed being back on stage again and in between songs they made some fun jokes in their native Bruges dialect. It all felt like a cozy show where you can see some good friends that you didn’t see in a long time jam some sweet beats as a way to celebrate the reunion.
In my opinion, the Cowboys & Aliens gig was another highlight performance of Belgian Blast 2021. A rollercoaster ride of fast and powerful stoner tunes performed by a band that had no signs of slowing down, literally nor figuratively.

{
+ A huge and varied lineup featuring a mélange of newly formed and well-established Belgian metal acts;
+ A lot of available sanitation;
+ Great food & drinks.
- Some of the bands had to shorten their shows because of time constraints;
- Limited parking space at the venue itself.
As a lover of metal from my home country this first edition of Belgian Blast Festival was a truly great time. A festival like this one shows that our humble tricolored country may be small in size but we certainly aren’t lacking in terms of raw metal talent across multiple subgenres and generations.
We’re already looking forward to the sequel! Can you spot me and Marjolein “Mrs. Metal Shredder” in the picture below? 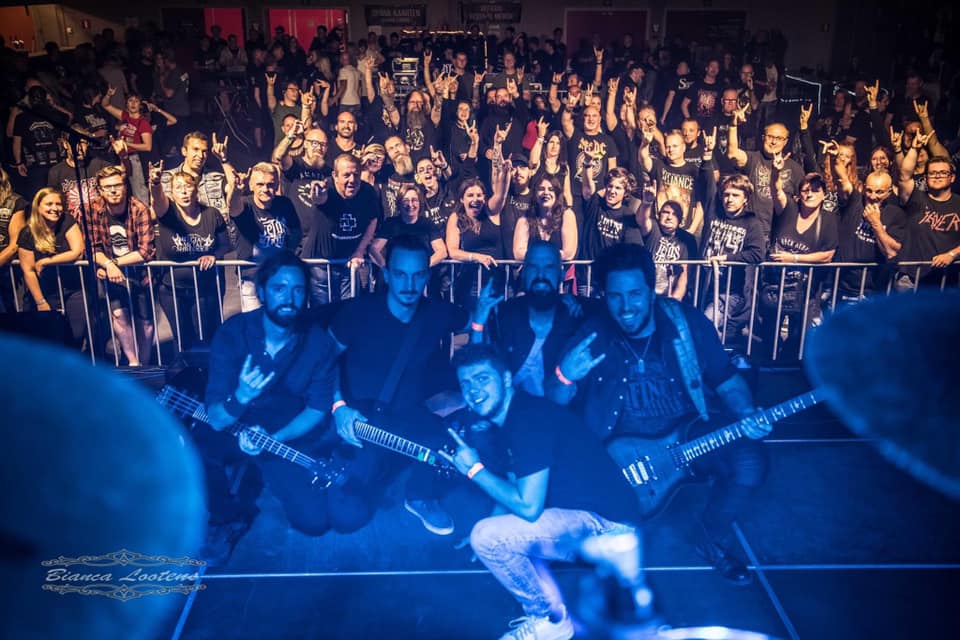