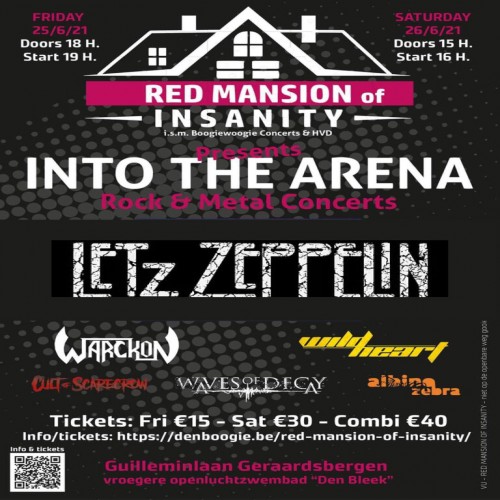 Review written by Stijn "Metal Shredder" with pictures by Rik Bautens except for the final picture which was made by Hano Jacques.

After more than a year of no live shows I finally got the chance to enjoy some sweet live rock & metal music during the inaugural Into The Arena festival in Geraardsbergen on Friday June 25th and Saturday June 26th 2021 in Geraardsbergen. This was also the first gig that I did together with my lovely queen Marjolein “Mrs. Metal Shredder” since we first met just after the COVID19 pandemic began back in May 2020. Kevin “Loco Shredder” also joined us for this party, we also met up with plenty of old friends who we didn’t see in a long time and after the festival wrapped up we all agreed on one thing, we had one hell of a great time!

The band to kick off Into The Arena 2021 was the Malle-based heavy, death, industrial and thrash metal band Waves Of Decay. While it’s quite a mouthful to describe this particular act’s style, they do give each of these aforementioned subgenres a fair share in their meticulously crafted sound. Most of the band’s setlist featured songs from the 2021 released second EP “Burn Your Angel Wings” (which we reviewed here: https://www.belgianmetalshredder.be/reviews/273) and those songs give Waves Of Decay’s sound proper justice.

The band’s performance had a melodic, dark and orchestral vibe despite the band not relying on much samples. That cinematic feel mainly came to fruition thanks to the operatic vocals, the rhythmic blast beats and the combination of both distorted guitar riffs and virtuosic guitar solos. Waves Of Decay’s songs also had a sweet unpredictability to them with many sudden changes in rhythms, melodies and vocal deliveries. The band members themselves were also pretty energetic, many of them engaged in frequent headbanging and vocalist Stijn also jumped off the stage and walked a part of through the seated crowd (of course while still respecting the social distancing rules).

Overall, Waves Of Decay provided a more than solid opening to this humble festival. Despite the daylight setting, the band did manage to evoke a certain darkness over the venue which we all enjoyed, banging our heads and raising our fists in the air. Well Waves Of Decay, we sure like the shape of your blood, pitch-black! 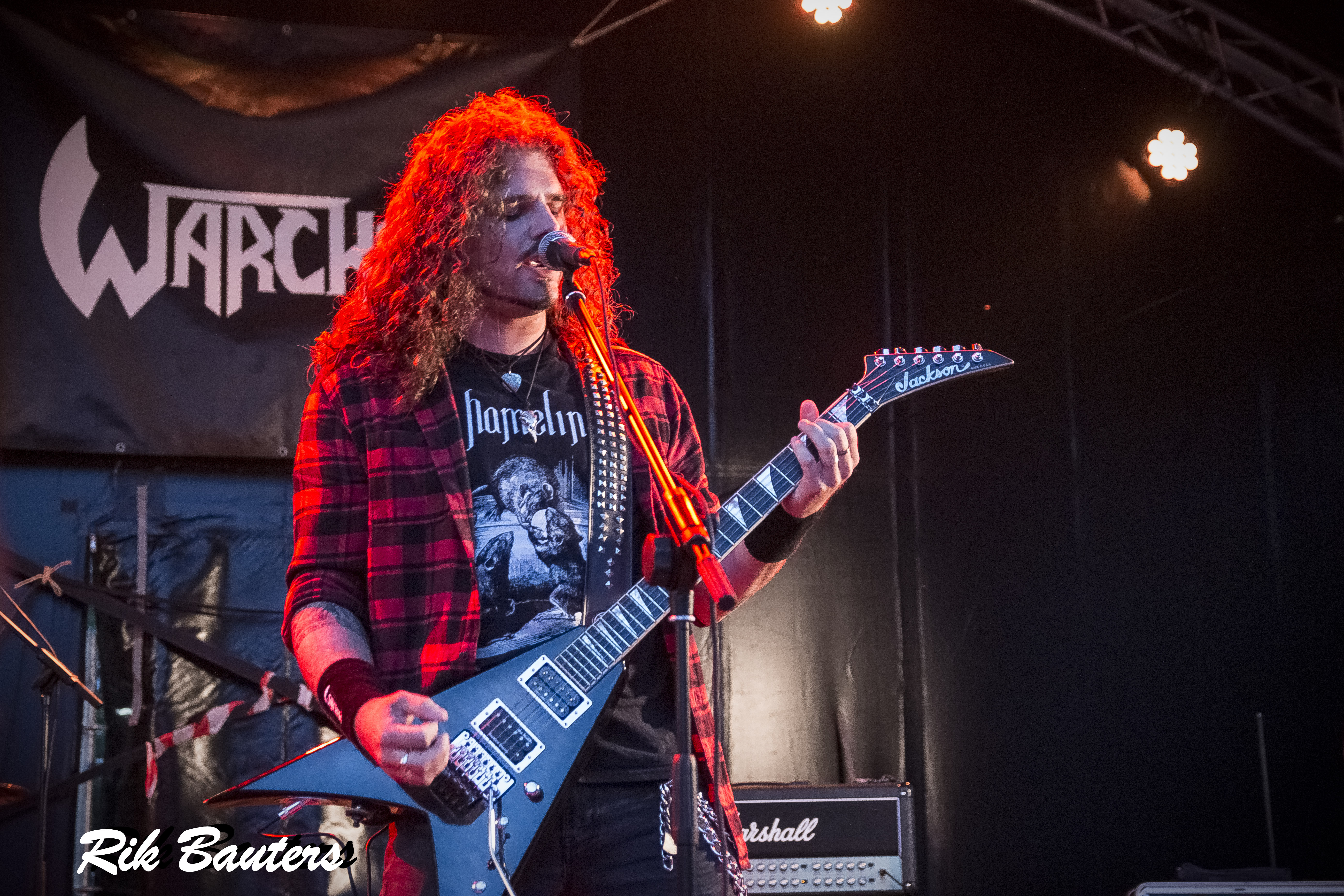 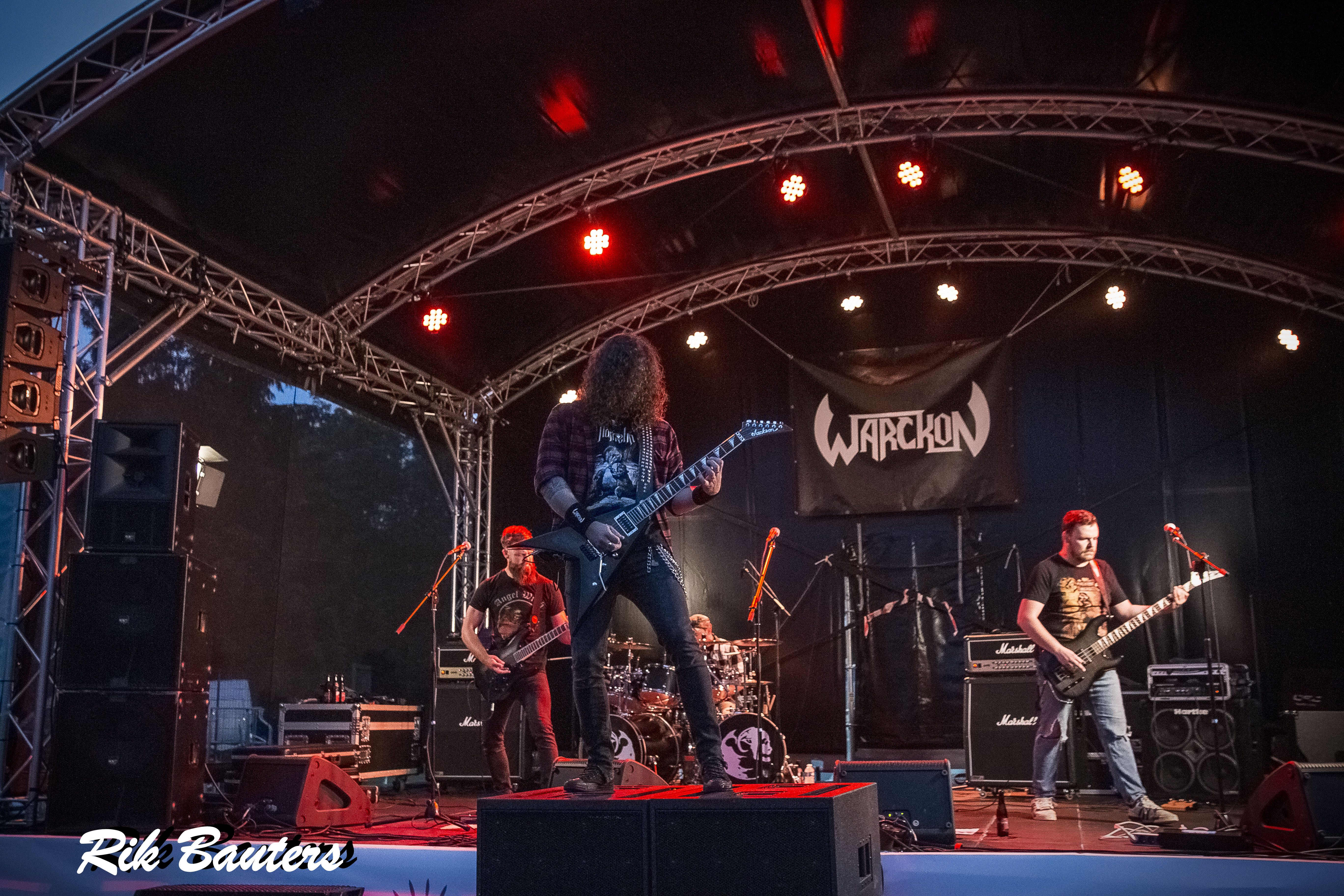 The second and already final act for the Friday part of Into The Arena was a band from Geraardsbergen itself called Warckon. It’s been a longtime since I’d last saw this beloved thrash metal act, mainly because for the past couple of years frontman Wouter had been spending most of his guitar shredding efforts with another great band from the same region called WildHeart (more on them later). He and the other Warckon guys, however, wasted little time bringing classic thrash power to the stage. And with classic thrash I specifically mean Megadeth as the band jammed out fast thrash beats along with snarly vocals and many sections of technical dual guitar solos.

I’d say that, when it comes to sheer guitar play, Warckon clearly was the best band on the entire event with both guitarists beautifully playing off each other! As for the setlist, Warckon played several of my favorite songs from both their albums but they also played a couple of new tunes for an upcoming third album. One of those songs had a clear Slayer South Of Heaven-era feel to it with the long and moody melodies in the beginning. Maybe the next album will be more Slayer than Megadeth, that would be quite interesting.

One thing that did spoil the Warckon show a bit for me was that the band relied too much on cover medleys. They covered material mainly from Metallica and Megadeth and while it was fun hearing those classics from a band who clearly knew and loved those bands, I wished they included more of their own songs (the track “Trapped” from their 2011 debut album was one such song that I dearly missed). But they certainly should keep their version of the Mighty Morphin Power Ranges theme song, awesome childhood nostalgia for me! All things considered, it was fun seeing Warckon live on stage again and I hope they’ll finally finish working on that long-awaited third album soon! And after Warckon’s gig it was time to head back home and prepare for Into The Arena’s second day.

The Saturday part of Into The Arena kicked off with a cover band called Albino Zebra. The band played classic rocks from acts like Anouk and Heart but later in their show they also treated us to Motörhead and Judas Priest (wish they had also played some Deep Purple, Black Sabbath or Rainbow).

Albino Zebra had both a male and a female singer and while they sang a couple of songs together there were also several songs wherein one of the vocalists did nothing but just standing at the back of the stage and just doing some gentle dancing. That was a huge missed opportunity in my book, because most of the songs they covered only had one vocalist and a song like Anouk’s iconic anthem “Nobody’s Wife” would certainly be a whole lot unique if both singers performed the song as a couple arguing with each other and if that particular song didn’t quite work for a duet then try finding other songs that are better suitable to perform together.

The rest of the band played the covered material sufficiently well but they did lack some much-needed energy on stage. So yeah, Albino Zebra’s gig had some highlights but they also left plenty to be desired, but I’m optimistic and I hope that the feedback I’ve provided here will allow the band to truly standout among the many other rock & metal cover acts around.

After the rather lackluster performance of Albino Zebra it was time for doom metal from the Waasland region as Cult Of Scarecrow took the stage. The band’s already been on a roll this year with their new album “Tales Of The Sacrosanct Man” already receiving very positive reviews (including from us, read it here: https://www.belgianmetalshredder.be/reviews/310) and getting a worldwide release this September. And that reinvigoration was very apparent during their Into The Arena gig.

It had already been since early 2019 that I saw Cult Of Scarecrow perform and I was quickly pleased to see the band had significantly improved both their material and live act. Obviously most of the band’s setlist came from their new release and I quickly noticed the show was much tighter, symphonic and guitar-focused than before. During that initial performance 2 years ago Cult Of Scarecrow already showed me potential but that gig also felt too long and dragged out. Now, their Into The Arena gig was longer on paper, but it sure didn’t feel like that thanks to the improved material that the band showed us. The hypnotic vocals, the juicy guitar solos, the hard-pounding drums, cinematic keyboards and the roaring riffs that make up for Cult Of Scarecrow’s sound were all omnipresent at Into The Arena.

Cult Of Scarecrow delivered a catchy and thunderous performance and I must say the festival’s open air woods setting further amplified the band’s doom dread. Only thing that could still improve the show’s atmosphere would be a nice and slow dusk, or maybe a pitch-black indoor venue lightened only by candles. Still, Cult Of Scarecrow is one excellent doom metal act, no matter how bright or dark the stage they’re playing on. 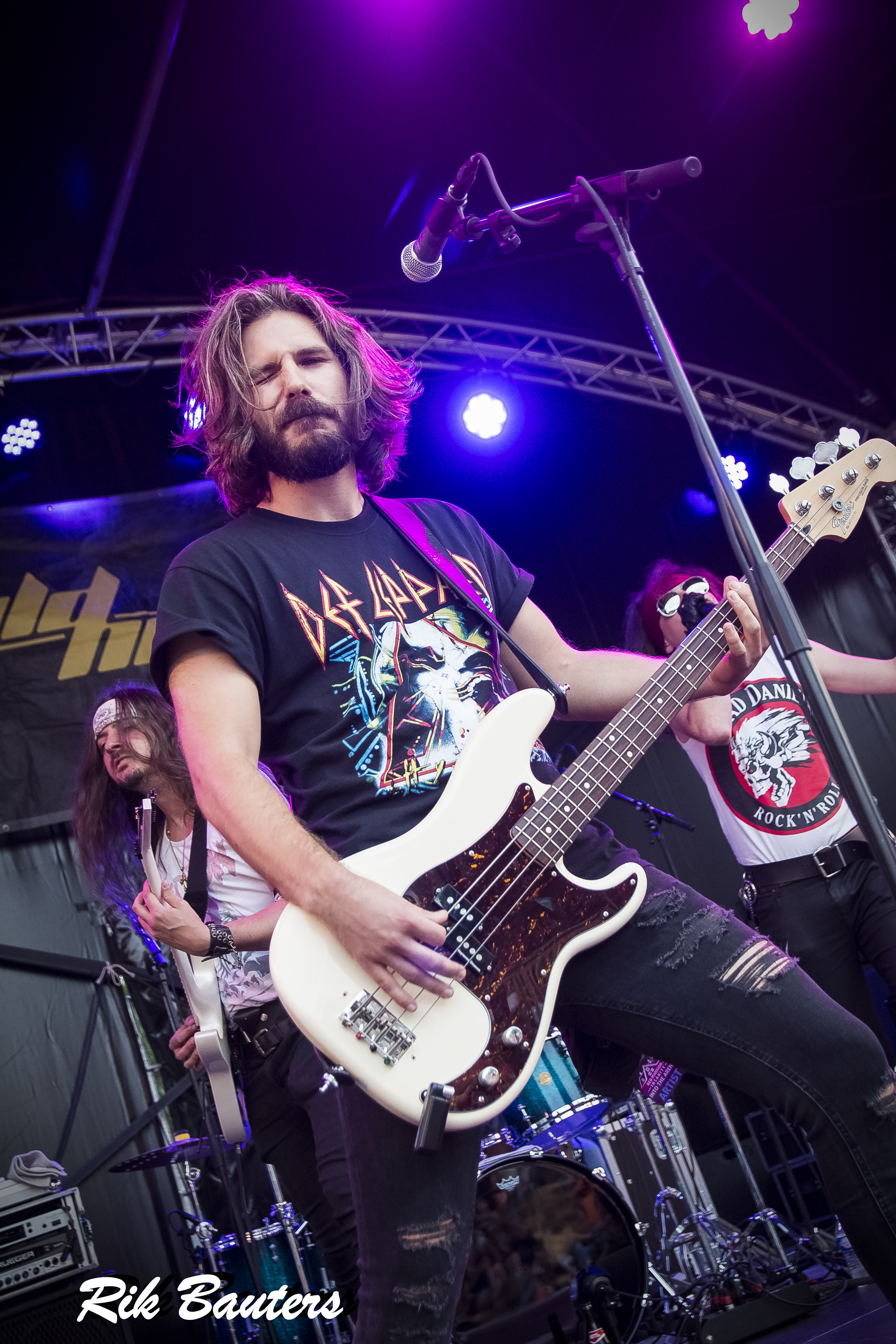 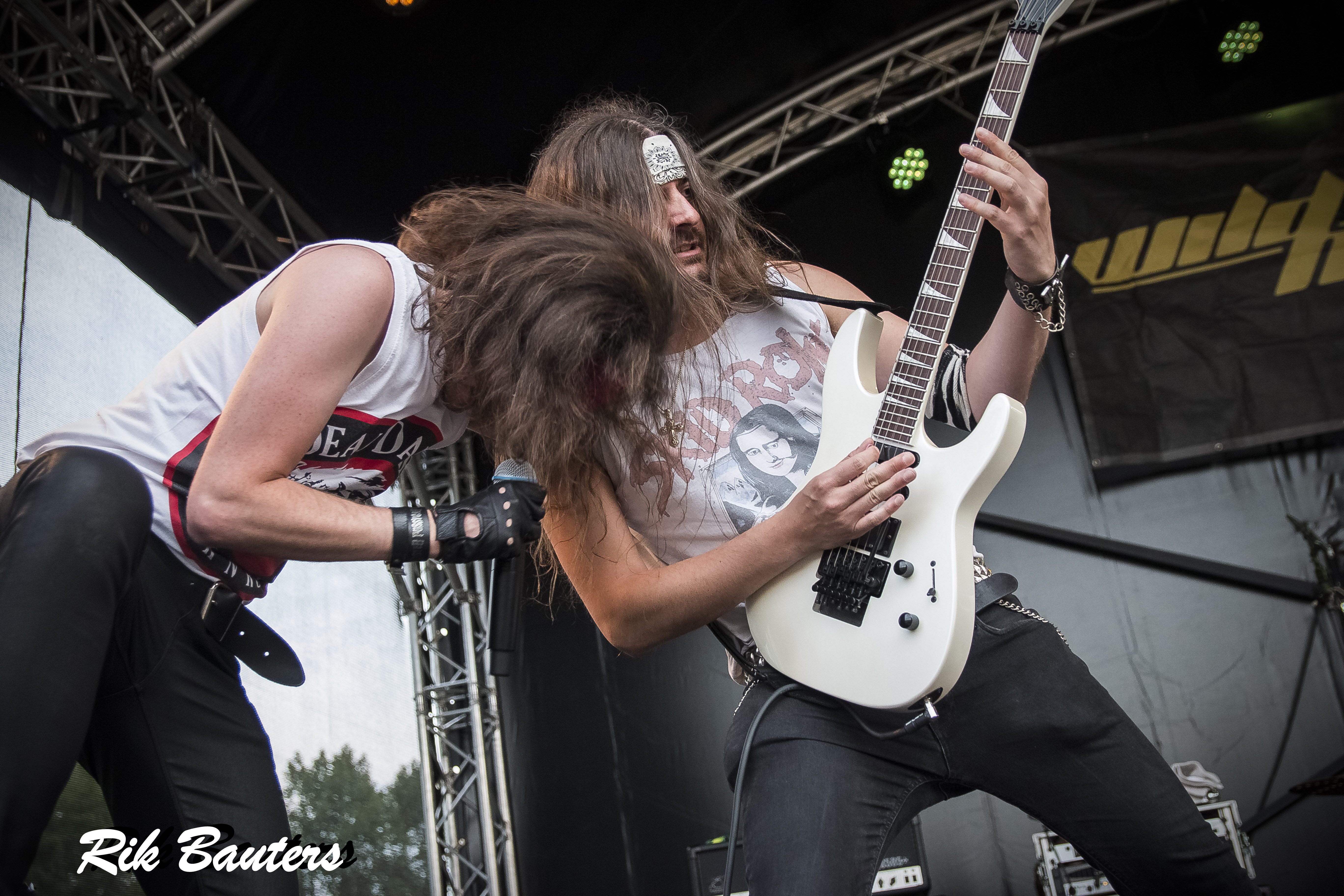 The last original band on Into The Arena’s lineup was the glamorous hard rock band WildHeart. The band’s a clear fan favorite in the Geraardsbergen area (which also is home to an awesome glam rock festival named after the band called WildFest) and WildHeart played a show exactly as I except from them. A colorful and highly energetic performance that offers an excellent throwback to the classic rockers from the 1980s like Mötley Crüe, Twisted Sister, Skid Row & Whitesnake.

The two things I love the most about WildHeart’s sound are the catchy, angelic-sounding vocals as well as the dual guitar solos. Like Warckon before them, WildHeart also knows very well to jam and grind their axes together for some damn beautiful harmonies. More than the other bands on the lineup, WildHeart made great use of the stage to jump and dance around, pump up the crowd so that they would become just as energized as they were and to top it all off, they used multi-colored lighting and upwards smoke trails to make their show even more visually pleasing.

The band's setlist featured several songs from their 2019 album “No Love” (read it here: https://www.belgianmetalshredder.be/reviews/146) as well as a couple of fan favorites from their debut album. And of course, they initially ended the gig with their beloved cover of Whitesnake’s “Still In The Night.” Yes, I said initially, because the band was allowed to play a couple more classic WildHeart songs before it was curtain call. There isn’t much else I need to say here, WildHeart brings old-school, flamboyant 1980s hard rock back to the masses with the same youthfulness and attitude as bands like Dokken and W.A.S.P. had in their primes. 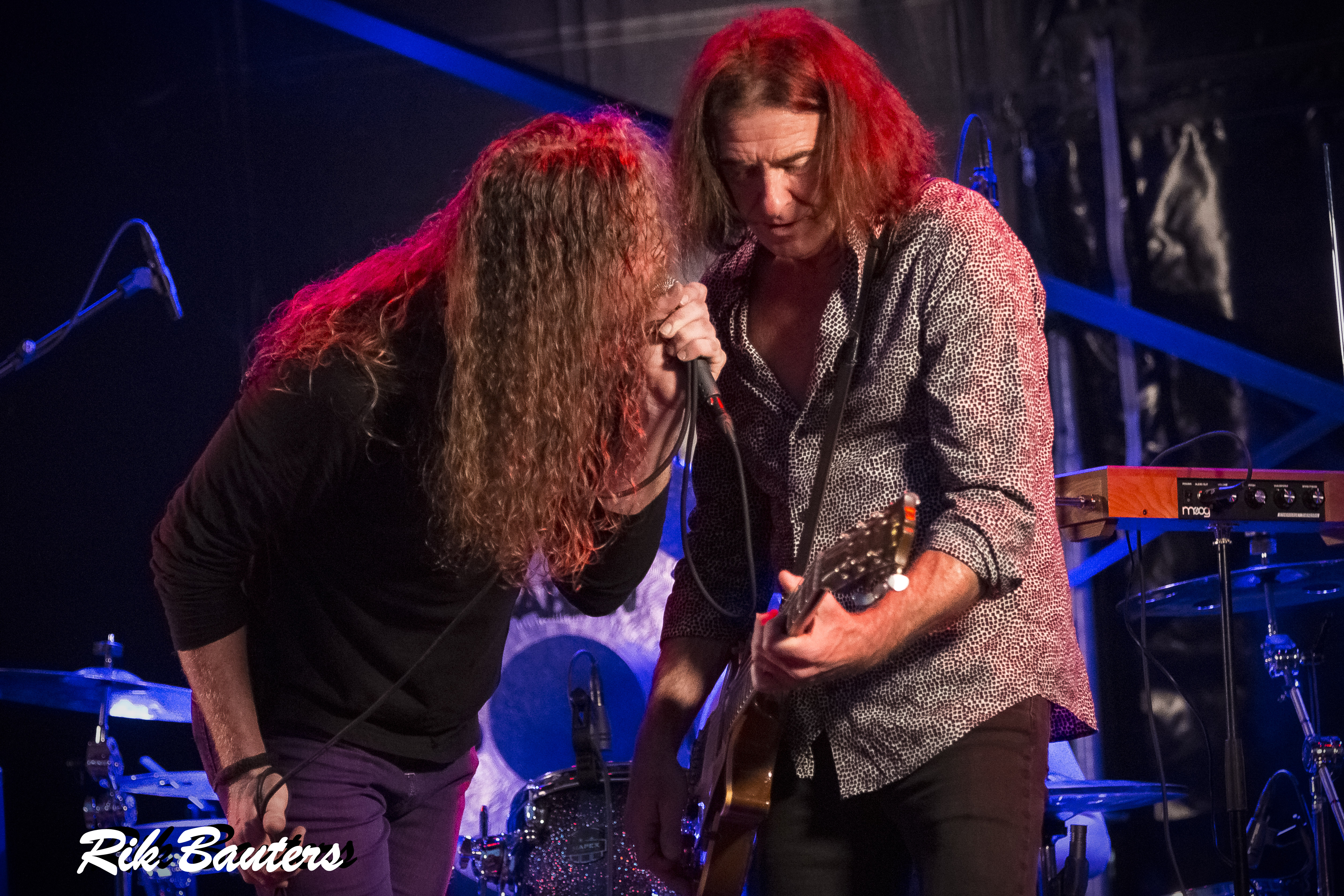 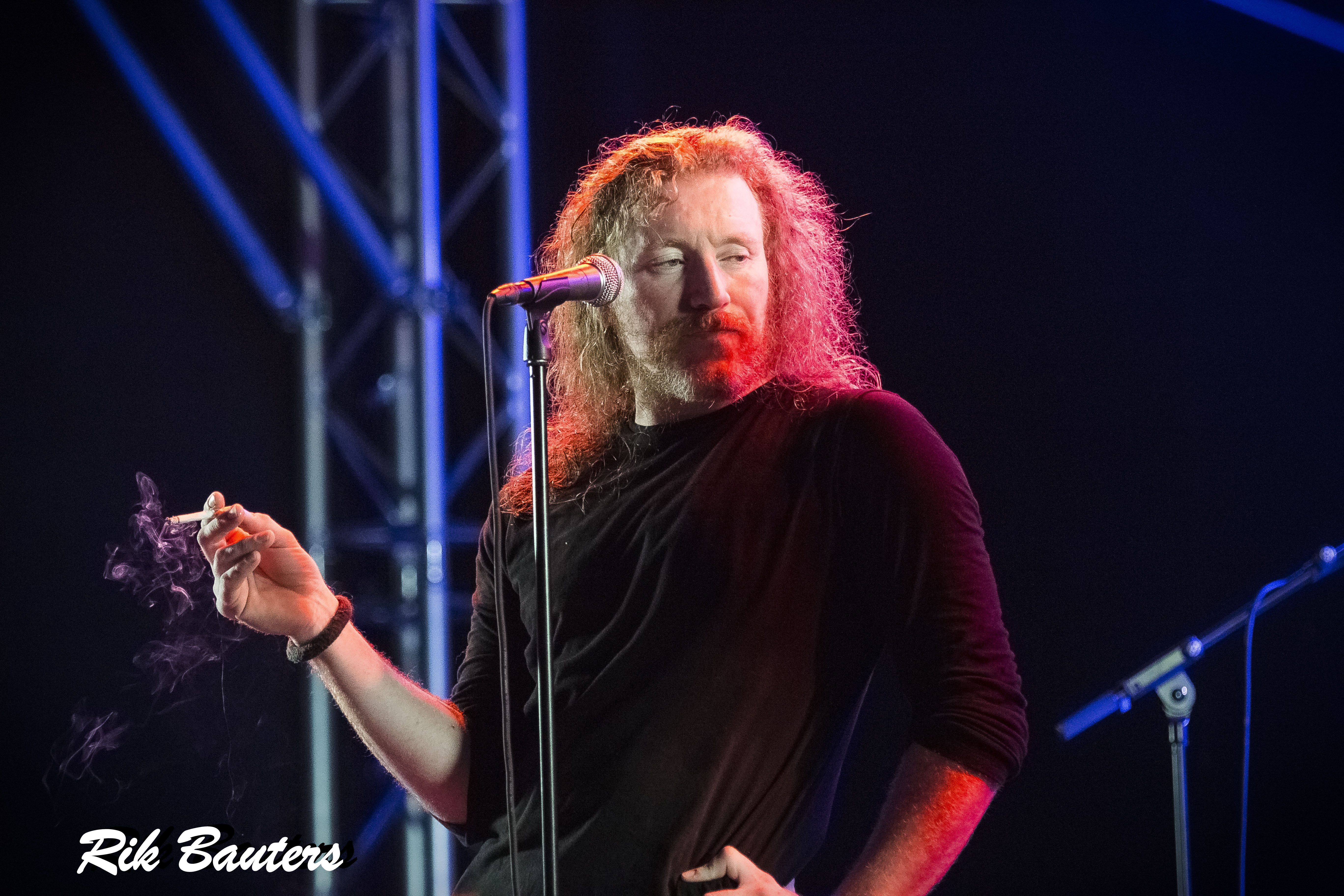 Into The Arena ended with a Belgian-British Led Zeppelin tribute band called Letz Zeppelin. You all know Led Zeppelin (unless you’re maybe just starting out exploring the beautiful realm of rock & metal) and the band played most of the iconic songs that I expect from a Led Zeppelin tribute show, including “Black Dog,” “Dazed And Confused,” “Rock And Roll” and of course “Whole Lotta Love” and “Stairway to Heaven” couldn’t be left out. Letz Zeppelin covered those songs without any unnecessary bells and whistles. Frontman Michael showed a good amount of Robert Plant’s looks and showmanship and guitarist Berre brought up the dual guitar when it came time to play “Stairway To Heaven.”

While Letz Zepplin’s setlist was a more than solid good showcase of Led Zeppelin’s greatest hits, I did miss a couple of songs like “Misty Mountain Hop,” “The Battle For Evermore” and maybe a “Moby Dick” drum solo, other than that, there isn’t much else missing from this joyful show except that it took the band some time to get up on stage. Anyway, after live streaming a couple of songs (as I did with all the other bands on the lineup, check our Facebook page for the videos: https://www.facebook.com/Belgianmetalshredder) me and my friends sat down, relaxed with several cool drinks and enjoyed the spectacle as Into The Arena was slowly but surely coming to a close.

{+ great festival setting (the forest setting offered some great walking routes in between band performances and there was also a playground for the kids)
+ varied lineup (hard rock, thrash metal, doom metal, etc.)
+ clever use of seating (the whole place was set up like an amphitheater with clear view of the stage from every available seat)
+ every band got a pretty equal amount of time to perform
+ plenty of parking space
+ solid backstage area (confirmed by Waves Of Decay)

While our time at Into The Arena was over before we knew it, me and the other Shredders had a blast visiting this short and humble yet well-organized and very fun event in a very enjoyable setting. We hope that organizers Red Mansion Of Insanity and/or music bar Boogiewoogie will make a similar event to this one, we’ll certainly be willing to come over.