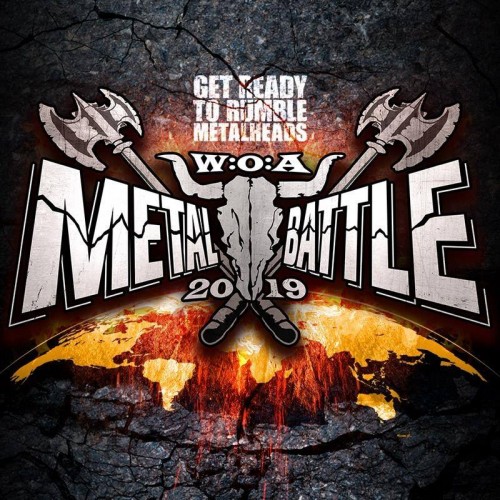 On Saturday May 25 Kevin “Loco Shredder,” Glenn “Terra Shredder” and I attended the finals of the Wacken Metal Battle Belgium 2019. Back in December me and organizers Eddy and Geert had over 90 unsigned Belgian bands to judge and we eventually cut it down to 24 artists for the 4 semi-finals. During each semi-final round both the jury (me included) and the visitors could choose 1 band for the finals. So eventually 8 acts reached the Volkskring venue in Zingem for one final showdown and the competition was extremely tight! Be sure to also check out our personal rankings in the CONCLUSION chapter of this article.
Picture collages by Bianca Lootens from Musika.be. Final picture by Dirk Baelen from Pixashoot. The first finalist was Hunter, an old-school heavy metal band that recently released their eponymous debut album. A sweet release that we reviewed shortly before the finals (read it here http://belgianmetalshredder.be/reviews/142). Simply put, Hunter’s style is a very fun homage to NWOBHM acts like Iron Maiden, Metal Church and Angel Witch. Tight, bass-heavy rhythms, soaring vocals and energetic dual guitar riffs and solos. Particularly bassist Jeroen stole the show with his sharp and clear bass lines and vivid stage antics as well as vocalist David who, despite a leg injury, also did a lot of dancing around and gave his full extensive vocal range to the masses.
Hunter ended up with a solid 44 points (5th place on the overall ranking). A fair score because of Hunter’s all kills, no frills performance. You may call their style generic, but the Hunter gang definitely brings it with a lot of competence and gusto! Next up was When Plagues Collide (from now on shortened to WPC), a symphonic deathcore band! Yup, as unlikely as it sounds, WPC combines raw deathcore beats and guttural vocals with keyboard and orchestra samples. And as we already figured out in our review of their 2018 album Tutor Of The Dying (read it here: http://belgianmetalshredder.be/reviews/98) this combination really works! WPC’s style ticked off all the right deathcore boxes (guttural vocals that sounded brutal yet natural, earth shaking blast beats and sharp guitar riffs) and the added symphonic elements made their sound feel more unique and grandiose than the typical deathcore act.
In the end, WPC received a mere 8 points (8th place on the overall ranking) but all three of us agreed that WPC still is a damn good band that we can warmly recommend to anyone who likes metalcore or deathcore! The third finalist was Primal Creation, another band whose material we reviewed in the past (read our review of their 2017 debut album Demockracy here: http://belgianmetalshredder.be/reviews/70). Primal Creation certainly was the most versatile band during the finals because they combined thrash, death and progressive metal melodies and vocals all together into one smooth package. The band’s motto is #voteclown which they also represented visually when a guy appeared wearing a clown mask and a slick grey suit and holding out the slogan DENY GLOBAL WARMING. Obviously a big stab to the current political climate and especially referring to a certain US president we’re all familiar with. Political messages aside, Primal Creation presented their music with a huge sense of rage and anarchy. Particularly vocalist Koen, with his wet hair, furious vocals and equally furious stage antics really came out as a guy ready to lead a riot against all the injustice in the world!
Add to that the catchy guitar work, fast-paced beats and overall musical variety and it all resulted in Primal Creation receiving 64 points (1st place in the overall rankings) and gaining the final win! Very well deserved, now go out there to Wacken and make sure they also #voteclown!

[THE CURSE OF MILLHAVEN] Up next was The Curse Of Millhaven! Like When Plagues Collide before them The Curse Of Millhaven came out to destroy the Zingem stage with ferocious extreme metal. Compared to WPC, this band played a more classic and melodic style of death metal and both Bart’s immensely powerful drum blasts and Jasper’s savage vocals served as The Curse Of Millhaven’s main highlights during their performance in Zingem. Hell, they played with such ferocity that they were one of the few bands of the night to provoke a mosh pit!
The Curse Of Millhaven ended with 33 points (7th place in the overall rankings). Not the worst score, but the band deserved better given the intense performance they had given us that night. In any case, The Curse Of Millhaven is slated to bring out their second album “Thresholds” this year and we’re looking forward to shredding that one! If you enjoy acts like The Black Dahlia Murder, God Dethroned or our country’s very own Aborted then it’s a no-brainer to give The Curse Of Millhaven a shot! The first of the two bands from Wallonia, Stand For. A bunch of five well-dressed young men who played a very upbeat metal sound that Loco Shredder and I thoroughly enjoyed back when we saw them during the semi-finals in Lens. I actually don’t need a lot of text to describe Stand For’s sound. It’s catchy, straight forward heavy metal that reminded me a lot of classic acts like Judas Priest with the high-energy guitar work and the commanding vocals. Stand For did an excellent effort in making us dance and sing along to their song and their self-titled track in particular has always been a true joy for us to listen to!
Stand For received 53 points (3rd place in the overall rankings). Don’t let their clean shaven faces and suits fool you, these five young folks know how to throw a metal party and they’re well worth checking out if you enjoy catchy metal! During the semi-finals Insomnia was the band that surprised me the most during the first live encounter Loco Shredder and I had with them during the semi-finals in Lens. While Insomnia describe themselves as a power metal band, I personally believe that they’ve got much more in common with groove metal bands like Pantera, Lamb Of God and Machine Head rather than Helloween, Dio or Hammerfall. Insomnia played an upbeat metal sound with distorted guitar riffs, clean raging vocals and head banging inducing beats. The band played one groove barrage after the other without taking any rest or showing any sign of fatigue. It almost looked like they were playing one long song split into many different parts. It was a very smooth experience despite guitarist Ludo’s technical difficulties which he suffered during the middle part of the gig.
Insomnia ended up with 39 points (6th place in the overall rankings). Like Hunter before them, Insomnia provided a throwback to a metal era of the past, this time the 1990s groove metal scene. So if you’re looking for a newly established band that makes you walk like fucking hostile, then Insomnia is well worth checking out! Along with the Curse Of Millhaven, Cathubodua is a band that I personally have been following for a few years now. And like that aforementioned death metal machine, Cathubodua’s act has evolved very positively over time. At its core, Cathubodua plays symphonic metal but they don’t simply rely on operatic female vocals and violin, they also mix in cues from folk, orchestra and even a few touches of thrash and death metal. Thus creating a sound that can be legitimately described as epic. Sara’s vocal range is huge to say the least, combining soprano with harsh vocals and more natural singing. Katrien plays her violin more like a rhythm guitar and the men in the group added the necessary heaviness and fast beats to make it all feel very cinematic and grandiose!
In the end, Cathubodua received 62 points (2nd in the overall rankings) and 2 points short of the eventual winner which was Primal Creation. While they may have not won the battle itself, they did end up getting signed to Massacre Records for the release of their upcoming debut album “Continuum” so in a way, they came out on top as well! The eighth and final band of this year’s WOA Metal Battle Belgium finals was the black, death and doom metal band Hudic. Kevin “Loco Shredder” had seen them during the semi-finals while for Glenn “Terra Shredder” and me it was our first time. After some technical difficulties with J’s bass guitar (which he quickly fixed without much hassle), Hudic made their entrance cloaked in black shirts, chains and hoods while the band’s frontman K wore the same brown monk robes he had been wearing during the semi-finals in Hasselt. Shortly after making their entrance, another black shirted and hooded figure appeared from the side of the stage and brutally “stabbed” Hudic’s hapless frontman and took his microphone! Eventually this mysterious assailant took off his hood and revealed himself to be K himself and so the show began! After those little theatrics, Hudic dragged a shroud of hellish red and smoky darkness over the Zingem venue as they played lengthy songs that combined elements from doom, black and death metal into one varied and engaging package. Vocalist K didn’t look like a demon but he certainly acted and sounded like one with his crisp yet growling voice and he also took a few minutes to roam through the crowd and make people look into his dead, white eyes. Scary stuff and I like it!
Hudic devoured 46 points (4th place in the overall rankings). I admit that doom metal isn’t among my favorite subgenres but Hudic provided an excellent dark and atmospheric sound that we can recommended to anyone looking for some great satanic looking and sounding metal!

{
Stijn “Metal Shredder” personal ranking:
1 The Curse Of Millhaven
2 Cathubodua
3 Insomnia
4 Hudic
5 When Plagues Collide
6 Primal Creation
7 Hunter
8 Stand For
Kevin “Loco Shredder” personal ranking:
1 Hudic
2 Cathubodua
3 The Curse Of Millhaven
4 Primal Creation
5 Hunter
6 Insomnia
7 Stand For
8 When Plagues Collide
Glenn “Terra Shredder” personal ranking:
1 When Plagues Collide
2 Hudic
3 The Curse Of Millhaven
4 Primal Creation
5 Hunter
6 Insomnia
7 Stand For
8 Cathubodua
This was my third consecutive time that I juried the finals of the WOA Metal Battle Belgium and it definitely was the hardest one for me. Not just because the number of finalists increased from 6 to 8 but also because each of those eight bands rightfully deserved to be present at this final showdown! All eight bands, each in their own way, kicked a ton of ass during the finals! Not only was I highly pleased with every band’s performance, but I was also happy that many more bands from Wallonia joined in for this year’s WOA Metal Battle. The past two years we mostly had Flemish metal bands but this year the southern part of our small Belgian country has given us a huge taste of its own rock and metal goodness. It’s perfect proof that music is one of the best ways to build bridges between countries, races and cultures. We’re already looking forward to next year. Thanks for reading, Metal Shredder signing off!